I left Capetown on the train on Friday for the one hour ride to Stellenbosch, an old Dutch settlement (1679) and home of the University of Stellenbosch, where my niece, Sara, did a college semester abroad.  The town is pleasant with wide, tree lined streets and a variety of architecture, including Dutch, Georgian, and Victorian.  Almost all the buildings are painted white, which I was told is to simulate the original Dutch whitewash.  Everything is so clean and white that it looks almost antiseptic.  One jarring note was the multi-story art museum at the University, which was red.
I am staying downtown at the Ikaya Hostel, which is a little funky but very well located, close to everything but away from the nightclubs so it is quiet.  My room has a balcony overlooking a park.  Next door is a large shopping mall which even has a movie theater.
It is a small town and easy to walk around.  It caters to students and tourists, so there are a lot of restaurants, fast food,  and coffee shops, as well as real estate offices and art galleries.  McDonald's is huge in Capetown, and there is a big one here, also.
One of my first stops was the Village Museum, a collection of four restored houses that represent four distinct periods in the history of the town, from the 17th century Dutch  farmhouse to the elegant Victorian townhouse.  They have docents in each house dressed in the style of the period.  I went into the last house and the docent told me three times that it was the first house in town with a bathroom, so I was surprised to see no sink in the kitchen.  When I got upstairs to see the bathroom, I realized that it is only a room with a big tub and a wooden apparatus with a bucket shower.  In other words, a bathroom with no running water.  What a difference a hundred years has made, at least in this part of Africa.

On Sunday I took a wine tour (www.winelands.com) and enjoyed one of the best days I have had in Africa.  It had been raining on Friday when I arrived, but the rest of the weekend was beautiful weather.  We had a minivan with five Germans in their early 20's, a young Swiss couple, and a South African couple.  The latter is a nurse who manages a neonatal intensive care unit in Jeddah, Saudi Arabia, while her husband takes care of the house.  She just completed a correspondence course for a Master's degree in Nursing through the University and was here for graduation.  They eventually want to move back to their home here so bought about 30 bottles of wine throughout the day, so they are certainly stocked up!  They can't take the wine to Saudi Arabia.
Our guide told us that wines have been made here since the first settlers came in the 1600's.  In 1980 there were only 15 wineries, but now there are over 800, the majority established after the international sanctions were lifted in the 1990's.  A lot of them are run at a loss by South African businessmen, who apparently just like the lifestyle, but many are run by immigrants from Europe and the USA.  We started at one of the oldest wineries, Muratie, founded in 1679 by a Dutchman and his slave wife, who was apparently the love of his life.  She planted a huge oak tree next to the house that is still there.  When he died, she could not inherit the property, so she walked the three days to Capetown and told the authorities he was gone on a  hunting trip for three months and had instructed her to sell the place.  She got the cash and disappeared with her three children before they discovered the ruse.  The tasting room enough cobwebs that they may be the originals.  The wine cellar still has old concrete tanks, not modern stainless steel.  All the grapes are still handpicked and they were crushing them the old fashioned way, with the feet, until a few years ago.  This was some of the best wine of the day.

Our second winery was Tokara, which is ultra modern, large, and a totally different atmosphere than the first winery.  They also make several varieties of olive oil, so we had an olive oil tasting after the wine tasting.  A lot of us were hungry by then, so the chunks of bread used for dipping into the oil were welcome.  They have a nice looking restaurant and beautiful art throughout the building.
One of the legends in the area is a French nurse who inherited her family's winery in Bordeaux at the age of 50.  She eventually sold it and came to South Africa to start a winery at age 79.  She is now 95 and going strong, which she says is due to the wine she drinks daily.  Not a bad example to follow. 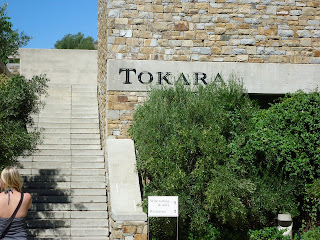 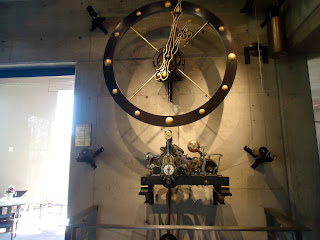 The next winery was Solms-Delia, a traditional South African winery owned by a neurosurgeon.  He reportedly knows every man, woman, and child on the estate and has created many projects to improve their lives, including a band and orchestra, and the workers give concerts and get extra money that way.  The original wine workers were mostly slaves.  After emancipation in 1834 they still got part of their wages in wine, known as the "tot" system, which led to rampant alcoholism.  If a husband worked on an estate, the wife was part of the contract, but if he died or was disabled, she lost her job and her home.  Now the workers have minimum wage and other laws to protect them.  We enjoyed a fabulous lunch at tables outside under the huge trees, then went to a different table for wine and cheese tasting, which was very pleasant.
Our fourth and last winery was Boschendal, one of the oldest Dutch wineries.  Our guide told us that Cecil Rhodes bought up a lot of wineries cheaply after the worldwide phylloxera fungus decimated the crops.  That guy knew how to make money, because after they grafted the grapes onto American fungus resistant roots the wine industry came back.  There is a huge grassy area in front of the house and barn-like building, reportedly because you needed a lot of room to turn around a team of oxen with a wagon.  We sat at large white wrought iron tables under a huge tree for our wine tasting, which made for a pleasant end to our day.  We got back to town around 6 p.m.

As I write this, I notice that not a single one of the wineries we visited is in the local free "wine route" guide or my Lonely Planet Capetown guidebook.  So I feel I "discovered" some gems, even though some of them are centuries old.  I couldn't have had a nicer day.
Posted by footloosemary at 12:11 PM