More desert as we go into Namib-Naukluft National Park, the largest game park in Africa.  It is hyper arid, with little rain, but the wind brings in mist from the Atlantic Ocean.  There are huge orange colored sand dunes, which are very old and the largest in the world.  The sharp edge always points north/south, since the winds are east/west.  That helps a little if you get lost.  A compass won't work here because there is a lot of iron oxide in the sand.  We stopped to climb Dune 45.  I only got about a third of the way up, since it is really difficult to climb up sand.  A young girl had fainted, so I stopped to help her down to her car.  That was my excuse. 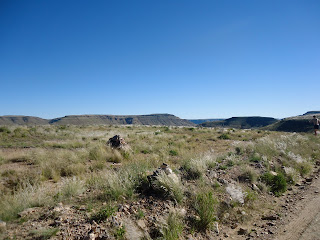 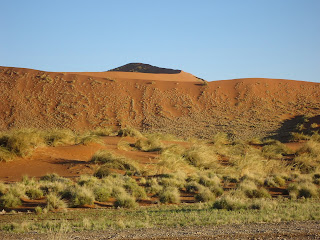 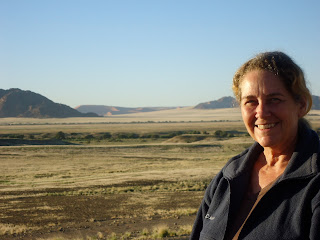 Sossusvlei is a vast clay pan in the central Namib Desert, which is surrounded by dunes.  We also visited Sesriem Canyon, formed by the Tsauchab River.


We stayed two nights at Hammerstein Lodge.  They rooms were OK but the pool was so dirty you couldn't see the rungs on the ladder.  They had pet cheetahs and leopards in huge cages that we could see.  We couldn't pet the leopard, but the cheetahs were amenable.  They had a pet Springbok running around who seemed to like to plant his horns in people's behinds. 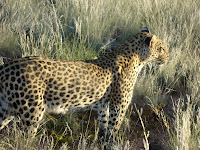 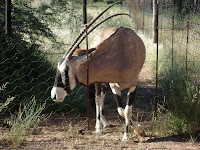 We stopped at a farm for a "nature walk," which actually was a drive in a safari vehicle due to the high grass and presence of snakes.  The guide, Franz, showed us a calendar picture of how the area normally looks--just orange dirt--and we could compare it to the same view at present.  It is lush and green, but he says that is an aberration.  Normally it is too dry to grow anything.  For awhile, people were raising Corcoran(sp?) sheep.  They have to kill them at 8 days old to get the curly haired wool, because by the time they are one month old it is straight.  PETA had a campaign against this in the 1970's, so the sheep are all gone now.  The guide explained how some insects and animals survive in the desert. 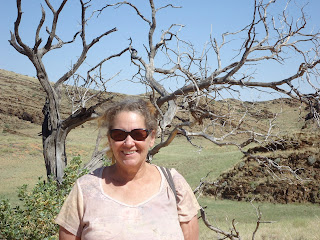 We stopped for a break at the small town of Solitaire, which boasts a fantastic Swiss bakery with great apple pie. 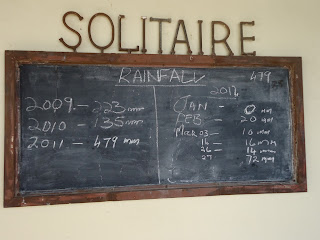 We passed the Tropic of Capricorn and finally reached Swakopmund, the adventure capital of Namibia and the main harbor for German Southwest Africa.  The architecture shows a lot of Bavarian influence.  We also visited Walvis Bay, 33 km south, which was a British possession.  There were supposed to be flamingos here, but seem to have gone on their annual migration. 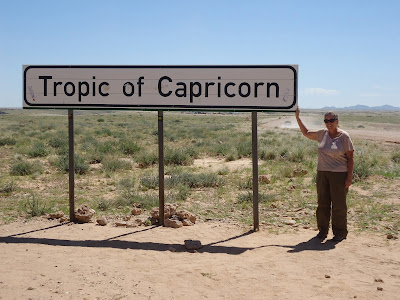 I took a dolphin cruise.  They were a little hard to spot due to high waves, but I did see lots of sea lions and pelicans, and they came right onto the boat to visit.  They are wild, but seem to be used to tourists.  The ocean cruise was a nice change after a week of desert.

Posted by footloosemary at 4:45 AM