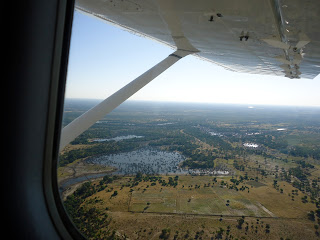 We drove to the Maun Airport and boarded two 6 seater propeller planes.  There is only one propellor on the front, none on the wings, so it feels a little insecure.  The flight over the Okavango Delta is only 20 minutes at about 500 feet, so we would not have far to fall and it would presumably be a soft landing with all that water.

The Okavango Delta is famous for being bone dry part of the year then near floods after rain that originally fell in Angola makes it way downstream over six months to finally reach the Delta.  They do have a rainy season here, but it is not much and mostly the rain evaporates because the air is so dry here. 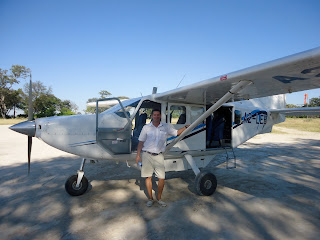 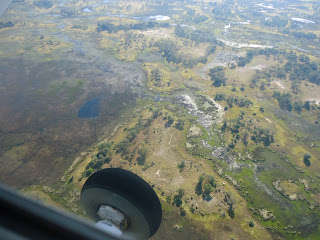 We are just starting to see the flood, so there are still a lot of animals about.  We went to our lodge, Moremi Crossing, and after a nice lunch and siesta left on the motorboat for a 3 hour sunset cruise down the Boro River.   It is most marked for the constant parade of water lilies along the shores. They open during the day and close at night.   We saw lots of hippos and some elephants and giraffes.   At one point we saw two bachelor elephants playing in the river, jumping all over each other and looking to have a great time.  There are crocodiles here, but we did not see them. 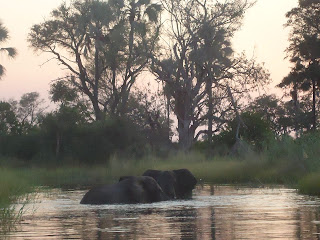 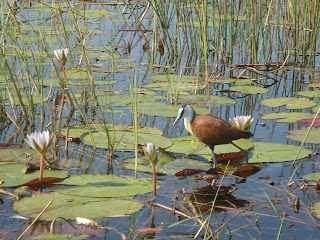 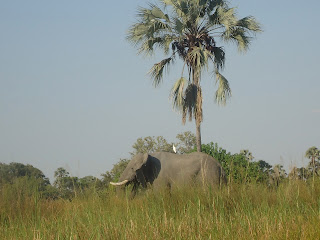 On our nature walk the second day we took mokoro boats (like two seater dugout canoes that are  steered by a poler in the back) through the reeds that grow in the water surrounding our island to another island and saw giraffe, a big herd of red lechee antelopes, impala, zebra and elephants.  We saw leopard and hyena footprints and walked the opposite way they were going in.  I was happy because I don't want to be caught walking by one of them.  Our guides do not carry guns as we are in a nature preserve.

After another great lunch, we had another siesta and another sunset boat cruise.  No hippos or crocodiles today.  We ran out of river as we went upstream, so the motor boat just pushed on through the reeds.  It is nicer doing that in a mokoro because you don't worry about the engine getting stuck with all the vegetation.

Before dinner, the staff got together and treated us to some of their traditional songs and dances.  Many of the staff are from around here, but in the 1960's the government made the area a preserve and the families that did not work in the lodges were forced to move to Maun, according to one of the guides.

The lodge is beautiful, consisting of a main building with bar, tables to eat at, buffet, lounge areas, and an adjoining swimming pool.  This building has a huge thatched roof and open walls.  The cottages number 15 and are separated by trees and water, so you are not bothered by your neighbors.  They all have wraparound decks, with chairs facing the swampy area.  They are actually tents but are huge and have two twin beds, a table and bench, dressing area, toilet room, and an outdoor shower at the back of each one.  There is no cellphone coverage or internet here, so you are truly getting away.  The lights and hot water are solar generated.  Unlike the orphanage in Uganda, they can store the power so it works all day and night.  It does take 10 minutes to heat up the shower in the morning, though.  You are not wasting water, because it is taken from the delta and goes through reverse osmosis, and waste water is returned to the delta. 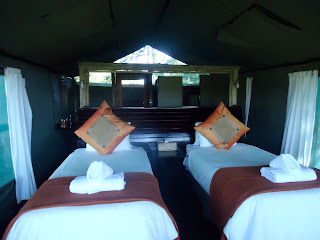 At night there is no light, so you can see fabulous stars.  The animals come near the tents at night and can be a little disconcerting.  I heard lions both nights, but never saw any.  Hippos and warthogs were right outside my tent though.  We were not allowed outside after dark.  One of the staff comes and takes you to and from dinner.  There is no phone, so they have a horn for medical emergencies in each cabin.


Sadly, we left the third day after breakfast, taking the boat back to the dirt airstrip 20 minutes down the river.  We had to wait on a bench for the Moremi Air planes to come.  They have nine planes, and seemingly an endless supply of young, cute white pilots.  We flew the 20 minutes to Maun at about 500 feet and were able to see zebra, antelopes, and elephants from above, which is quite different. 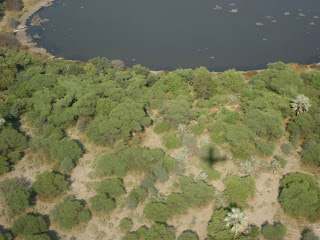 Posted by footloosemary at 4:50 AM