I reached Bulawayo on 4/26 and was taken up by Noma and "Z" from Silvane tours.  I was pretty sure, but not positive, that Tandy from their sister office in Victoria Falls had made my room reservation at Cresta Hotel while I was sitting there, but Noma said that when she called they had no rooms.  She said she also called twenty other places, so they were going to take me to their co-worker's house to see if I liked her spare room, or else we would look for another lodge.

I went to meet Christine and her fiancee Richard at their home in the Northend suburb.  The room was fine, but I did not fancy her having to take me on when she is on vacation this week, since that seemed very intrusive.  We went to another lodge that had told Noma they had a vacancy, but they had booked the room.  It is the annual Trade Fair week, so rooms are extremely scarce.  We drove around and investigated a few other lodges.  One in the industrial area had a room up three flights of stairs with a shared bath, which I declined.  We kept finding "no vacancies" till we found another in the Ilanga suburb that had a decent room with shared bath down the hall for $130.  That seemed a rip off since the best hotel in town had quoted me $105, even though they "lost" my reservation.  It is apparently the practice here to jack the prices way up for Trade Fair week.  It must work, since there are almost no rooms left in the whole town and the Fair did not officially open until the next day.  My last option was a room at Z's house.  He is a bachelor and does not cook, and the house was a little messy, though the huge yard is beautifully kept up by the gardener.

After two hours of driving around, I decided to go to Christine's.  We made a detour to the Trade Fair, which was having a preview day before President Mugabe comes for the official opening.  The place was packed, with exhibitors from all over the world, including Ford autos.  It was kind of like a county fair, with permanent exhibition buildings, livestock, agricultural exhibits, music, dancing, and food.  We walked around, but I was a lttle tired at this point and not too much I was interested in.  It reenforced my feeling that, despite what we hear about it being next to last on the list of "failed nation/states," Zimbabwe is doing well.  Downtown was busy, with few empty storefronts, lots of people walking around, and no clunker cars in sight.  In our search for a room, I saw many nice, orderly suburbs.  I rarely saw white people apart from at the Trade Fair.

Christine and Richard are very nice and welcomed me to their home.  She apparently has no money and no food in the house, since "payday is far off."  Z took me to the supermarket and I bought salad and bread for dinner and Christine made some chicken.  There was no butter, milk, or salad dressing in the house.  Then I discovered that Christine and Richard live elsewhere in a room they rent for $135 a month and they are house sitting for her sister, who is currently in South Africa and getting ready to move to Wales with her new husband, who she lived with five years ago before he disappeared when she was six months pregnant.  I am sleeping in the sister's bed, and hopefully she will not be back before I leave, although she may show up tomorrow, along with her two kids.  The new husband is already back in Wales and she is trying to get them all visas to join him.  Christine, Richard and I stayed up late talking about Zimbabwe and the life here.  They were born before independence and consider themselves white Rhodesians.  They had some horrific stories about violence and corruption in the country.  A few years ago the markets had no food and you could not buy anything.  Inflation was so bad that millions of Zimbabwe dollars would not buy you a loaf of bread.  You were not allowed to take money out of the bank, and many people were forced off their properties with no notice so ended up leaving the country with only the clothes on their back.  Christine works full time and gets the standard wage of $200 a month.  Richard is currently an unemployed miner, but has made as much as $1000 a month in the Congo.  He is unable to get a passport, though, since they say he is not Zimbabwean since his grandfather was English.

Z and Noma picked me up the next morning, along with Shah Shah, an experienced guide who is also a second year law student.  Noma apparently had been working in the butcher shop next to the travel agency until the week before and I am her first client.  Christine trained her and has been advising her even though she is on vacation.  Z is the owner's brother and has his fingers in other pies besides driving for tours.  The owner works for the UN and is currently in Sudan.  Tandy in the Victoria Falls office also came from the butcher shop and just moved up there a week ago.  So I am kind of a test client for all these people.  The hotel room was a major mix up, but they seem to be bending over backwards to make up for it.  My one day tour is stretching into three.

We are going to Matopos National Park today, where they have Bushman cave paintings and Cecil Rhode's grave.  They made some mistakes in picking me up half hour after the agreed on time,and stopping to get diesel, food and drinks after they picked me up, so we had a late start for Matopos.  It is about a 45 minute drive from Bulawayo.

The first stop in Matopos was the Memorial for the Tin Heads (MOTH), which is apparently an international organization that maintains graves for soldiers from WWI and WWII.  The ashes of several soldiers were brought here when it was established in 1927, then the WWII victims were placed here in 1947.

Next we visited the White Rhino Cave.  It was kind of a difficult climb up for me, since I had to scramble over some rocks, but would be no problem for a younger person in normal shape.  There is a huge rock cave with pictures of animals and men.  Shah Shah says the paint is a mixture of blood and an unknown plant.  After we climbed back down, I saw a cobra about two feet from me.  Luckily it was a youngster and quickly moved away.


Next we drove past many interesting rock formations to the "top of the world" hill that holds the graves of Cecil Rhodes, some of his friends, and soldiers that were killed in a skirmish nearby.  The 360 degree view is extremely impressive, since you just see all the interesting rock formations all around and no manmade structures except for the road as far as you can see.  This was part of Cecil Rhodes" South African empire, besides the Kimberly and De Beers diamond and gold mines.  He actually died in South Africa in 1902, but his will stated that he wanted to be buried here so he came in state after being seen off by a huge crowd in South Africa.  Our guide says the area is rumored to hold the legendary King Solomon's mines, which probably is what drew old Cecil here.

We had lunch at Mekele Dam, a picnic area with a small lake.  Noma had purchased roast chicken, rolls and fruit, which was perfect.  The only problem was many small flies that seemed to like me and were getting into my eyes and ears, though they didn't seem to bother the Africans much.

After lunch we went to the Pamongwe museum and cave.  This was much bigger than the first one and almost a half round like a bowl.  The cave paintings were faded but you could still make some out. 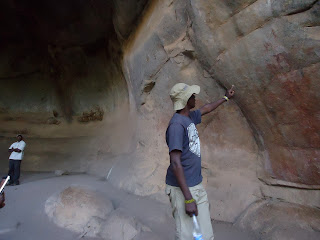 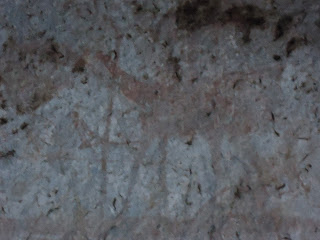 Our next stop was the Natural History Musem in Bulawayo.  The first floor had a lot of very bad (or very old) taxidermy showing different African animals.  Upstairs was more focused on history and entomology.  Some of the exhibits were empty, like the African gold artifacts.  A lot of the lights didn't work so some exhibits were hard to see.

I had stated that I had not seen any poor Zimbabweans, when that is all we hear about.  They drove me through the township, where the white people's domestic workers and such used to live.  It is still a thriving community and much more like what I think of as Africa, with outdoor stalls, rutted roads, small and block houses.   Not as bad as the townships in South Africa though, and there were a lot of satellite dishes around.

Back to Christine's for more chicken and salad.  Kevin from Chipangali called and will pick me up in the morning.

Posted by footloosemary at 4:57 AM