Our tour ends in Victoria Falls, my fourth time here.  This has always been my favorite place in Africa, and I thought Okavango supplanted it, but seeing the falls at peak flow with several rainbows along the length has put it firmly back on top.  I had my umbrella but still got totally soaked walking on the path above the falls, as the spray is incredible and at places you can't see in front of you because the mist is so heavy.  It was a beautiful sunny day, unlike the gray day I had here in December.  I had my lunch with me in a baggie and planned to find a nice spot to sit and eat it.  Everyone else had already eaten theirs since they missed breakfast due to the early game drive.  I was walking past some baboons and one made to grab it.  I batted him with my closed umbrella and he ran away.  Then some others on the path were eyeing it but I stared them down and they walked away.  Finally one big bruiser just came up and grabbed it.  He sat as high as my waist and had very long arms so I just let the bag go, as I knew not to mess with him or he would use his big teeth on me.  Some of the Germans who were walking with me took pity on me and gave me a sandwich and an apple. 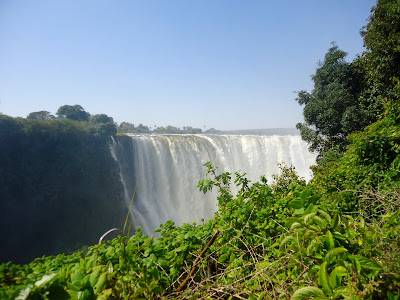 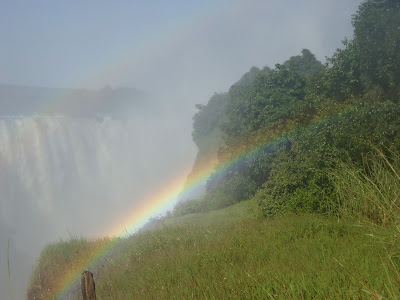 For our farewell dinner that night, we went to A Zambezi resort.  They had a nice buffet, including grilled warthog, which sounds awful but was actually a lot more tender and flavorful than the grilled beef and chicken they had.  For entertainment, they had an African marimba band.  Several men played xylophones, drums, and marimbas.  Most of the songs sounded African, but they did play Guantanamera.  After that, they had some male African dancers, who were quite good.

I elected to stay two extra nights at Elephant Hills resort.  The second day I went on an elephant safari through the bush.  We were six  tourists plus handlers on three elephants.  It was hard for me to get on and off, and when we went downhill and I had to lean back, very hard on the hip joints.  I survived. 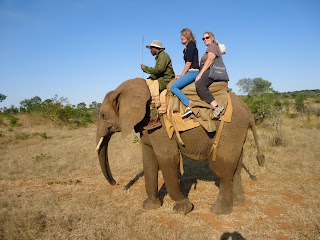 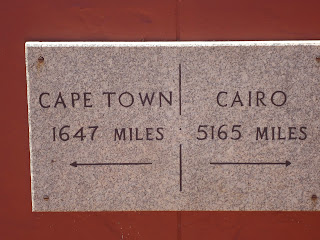 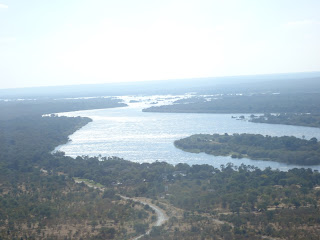 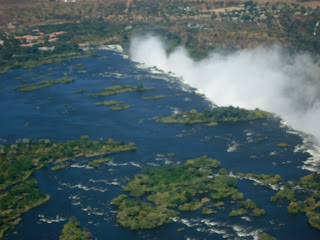 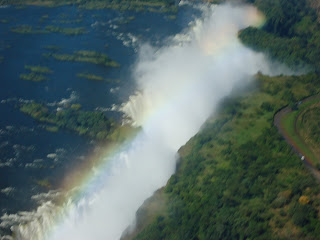 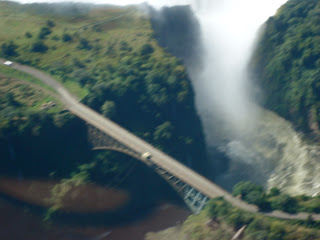 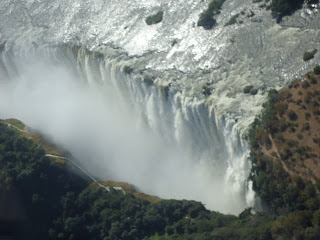 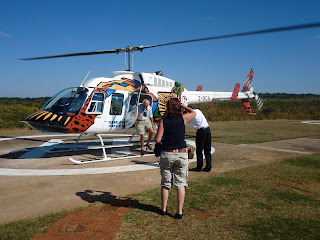 The third day I took a shuttle into town to see about the train to Bulawayo.  Air Zimbabwe has an office but confirmed they are not flying.  The office is apparently open just to give the information that they aren't operating, but they haven't been for at least a year.  When I looked online, the airfare to Bulawayo was $1200.  It is only a five hour drive, but you can't fly there directly, only from Johannesburg.  The train takes 12 hours (or more), but I really like trains so I would like to try it, at least one way.  You have to book it the same day you travel, so I got there on the first shuttle at 9:45 and first class sleepers were already sold out.  I did not fancy sharing a second class sleeper with three others, plus they don't furnish bedding in second class.  I ended up making a bus reservation for the next day.

I had lunch at the Victoria Falls Hotel, the oldest hotel in Zimbabwe and always a treasure.  From the terrace restaurant I could see the mist from the falls and watch the bungee jumpers on the bridge.  I could hear one girl screaming, presumably as she fell.

I went into a travel office to investigate tours in Bulawayo, since I will be there an extra day before I have to get to Chipangali, the wildlife orphanage where I will volunteer next.  I booked a Friday tour of Matopos National Park.  They also arranged for me to stay at Cresta Hotel in Bulawayo for two nights.

The next afternoon I splurged and paid $130 for a helicopter ride over the falls.  I thought it was well worth the money.  It was a beautiful day and I saw several rainbows, sometimes two at once.

Since I am not overnighting on the train, I moved to the Kingdom Hotel for one night.  I got them to give me the internet rate of $175, but it is still $45 more than Elephant Hills.  It felt like coming home, though, after having spent a week there in December.  One reason I moved was to get better internet, and I never got it to work there.  So I am extremely late on my blogging.

After a rushed 7 a.m. breakfast, I got on the Pathfinder bus at 7:20.  The bus goes daily and I wasn't expecting much, since this is Africa.  It was very luxurious though.  There was a driver and a host, who wore a dress shirt, tie, and sweater vest.  At 8 a.m. he offered Cokes, and at 8:30 we got sandwiches (chicken salad or cheese and tomato).  Then he came by with bottled water.  We had a 5 minute rest stop at Hwange Safari Lodge in the National Park, and only two other brief stops to pick up people.  While I was on the bus, Noma from Silvane tours called me to find out when I was arriving, so when I got off the bus at 12:35 (25 minutes early), there she was holding a sign for "Mrs. Morris," so I felt well taken care of.

Posted by footloosemary at 4:54 AM