It was very bittersweet to leave Africa.  My last day was May 14, and I spent some time standing on my balcony at Elephant Hills looking down at the huge lawn and the herd of impala grazing there.  In the distance I could see the Zambezi River and the huge clouds of mist from Victoria Falls.  The air was very fresh with a faint chill left from the night, but the sun was shining and the sky a beautiful blue.

I took a taxi to the airport and boarded a British Airways jet to Johannesburg.  I had to wait 3-4 hours for the plane to London and used the time getting last minute gifts and using up my remaining South African rand.  Then I had an 11 hour flight to London and another 11 hour flight to Los Angeles.  So I was quite done in when I reached LA, and was happy to see my brothers David and Alan there to pick me up.  I was not so pleased that the customs officer confiscated the $15 worth of kudu biltong (like jerky) I had bought at the Johannesburg airport for my brothers.

I stayed a few days in Santa Monica at the family home and used the time shopping for some new clothes, since I had donated a lot of mine in Africa.  On Saturday my friend Laurie picked me up and took me to her house in Westminster.  Then followed many lunches and dinners to get together with old friends.  I bought a new camera to replace the one I gave to the the lion caretaker at Chipingali.

Posted by footloosemary at 10:16 PM No comments:

We have had several new animals in the time I have been here.  We have two kittens and 4 black bunny rabbits, all found on the property with no mom in sight.  It is difficult to get the bunnies to take milk from a syringe, but they seem to be doing OK.

A few days ago a man on a bicycle brought a baby steenbok (small antelope) in his backpack.  We put it in a cardboard box with grass to keep it warm and fed it milk, but it died that night.  They tell us that antelopes get very anxious and like to hide, so they often die before they get used to humans.  We have another small antelope, a duiker, who has been here a few weeks already.  They thought he would die, but he is getting more used to humans and not hiding in the covered part of his cage so much.  He will now even take food from my hand sometimes.

We have had two new baby goats.  The first was premature, I think, because the second one was born a few days later and was three times the size of the first one.  The first one had difficulty eating in the beginning, but has come through that OK and the kids are now about the same size. 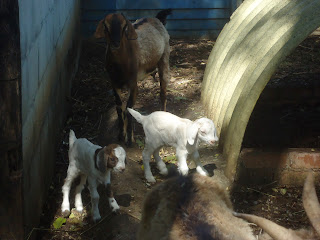 There is also a baby leopard and three lion cubs, but I am not feeding them!  Their mothers are taking care of them fine.

The chores are many and varied.  We had to rake up dried grass that had been previously cut into piles.  They grass was put in a truck and is now in a covered area.   I have to go there to get new grass to put on the floors of the monkey and lion cages.  One day three of us went to the "game park" part of the property, which is wild but fenced in, to search for snares put up by people trying to catch our wild animals.  We went through a lot of high grass, and Arnaug and Jackie both had several ticks on them.  He got bitten, but I came away untouched, at least as far as I know.  I don't think they have lyme disease here, but there is tick bite fever, which Nicky has had and says gives you horrible headaches.  Another day we made chain link fence, which I didn't know was possible to do by hand. 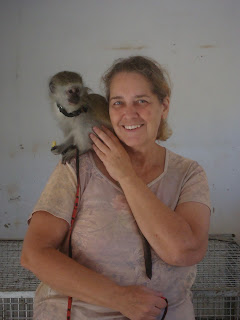 Nicky surprised me by taking me to the local primary school for a tour.  They just started buying baby chicks and raising them to sell to get money for the school.  We went back the next day so I could donate a couple of boxes of pens and to have one of the Chipangali workers cut down some Eucalyptus trees so the parents could make a new jungle gym. 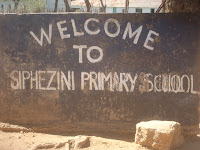 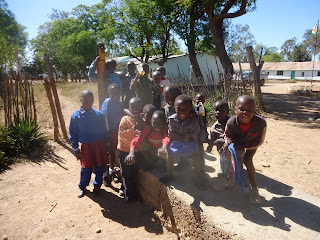 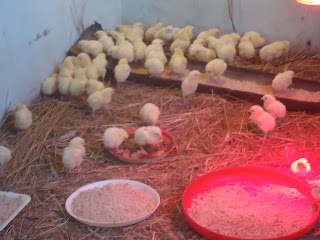 We have visitors for the weekend:  two of the trustees are Finnish but live in Harare and run an orphanage for children whose parents died of AIDS.  They brought two young Finnish volunteers and five orphans.  So now we have about 20 people for meals, but it seems to be working out.  The kids loved seeing the animals, but are afraid of the kittens and won't hold them.  I have seen that reaction in other African children.  Pets don't seem to be common here.  Cats are to catch rats, period. 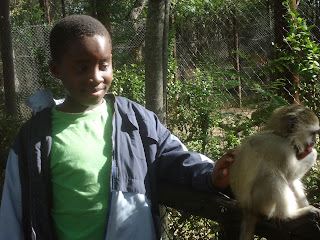 Posted by footloosemary at 8:29 PM No comments:

Nicky Wilson picked me up two hours late because of a late start and  trouble finding the house.  We stopped at the Indian vegetable store before heading out to Chipangali, the wildlife orphanage that sits on about 200 acres 20 km outside of Bulawayo.  I got a tour of the facility and met Nicole, the volunteer coordinator, and the other volunteers:  Mikhail from Norway, Chris and Xander from Holland, Armaug from Israel, and Jackie from Australia.  They are all 18-24 except for Jackie, who is a 42 year old nurse who alternates working and volunteering in Asia and Africa. 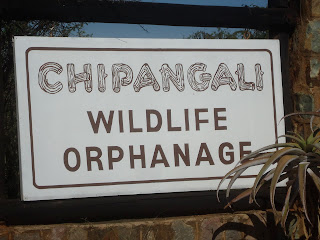 Our accomodations are in "the Camp," which has 6 cabins, a kitchen and dining area, a toilet and shower block, and a lawn area with a barbeque, swimming pool, and a firepit 6 feet in diameter.  They are in the process of rebuilding the cabins, and the new ones are brick on a concrete slab with thatched roofs and ensuite bathrooms.  Currently they have only one done and one in process, but they are supposed to be finished by December (TIA?).  I have no windows in my cabin, but the metal roof is supported by logs and is open on both sides between the walls and roof.  I do get spiders and rats at night, so I got a mosquito net so I can feel more secure when I sleep.  I haven't heard any rats since I got rid of the
food I had with me.

We have breakfast in the Camp kitchen,  mainly toast and coffee or tea, but there is a refrigerator with eggs and syrup, so I did get ambitious and made French toast on the hot plate on my day off.  We work six days a week and have to be at roll call at 7:45 a.m., so toast is enough effort most days.  I am usually the first one up and heat the hot water.  There are always a lot of bugs (mostly ants) I have to clean out of the pot first since they are attracted to the water left in there overnight

At roll call, the African workers get their assignments for the day first, then Nicole decides what to do with the volunteers.  This is Jackie's second time here and she has been here a few months, so she is in charge of feeding and cleaning the cages of the carnivores (lions, cheetahs, hyenas, leopards, jackals, mongoose).  She usually takes one volunteer to help, plus they have an African worker.  The rest of us usually start by cutting large, leafy branches from various areas on the property with machetes and dragging them to the antelopes and goats for feeding.  They have to eat 20% of their body weight each day.  Then we do whatever needs done, like cleaning cages or just playing with the animals, especially the ones who are in cages by themselves.   A lot of the animals are orphans or injured in some way, like being bit by a lion or hit by a car.  We have birds with only one wing and a blind monkey.  There is also a warthog, cows, sheep, and goats.

It is expensive to keep 25 lions and 3 leopards in meat.  A lot of the "food" is donated by local farmers when animals die.  In the first week I was here, they got calls to pick up two donkeys, five cows, a horse, and numerous chickens.  They have a large refrigerator to store the meat.  I try to avoid the area where they cut the things up, since dead animals can be quite odiferous and attract a lot of flies. 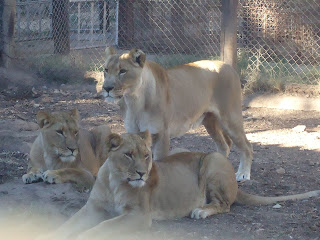 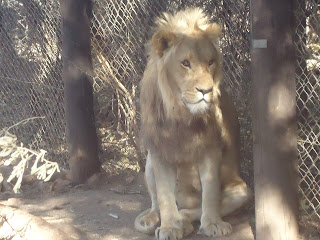 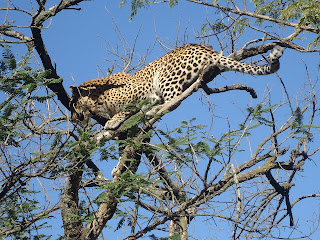 The orphanage was founded by Vivian Wilson, a former park ranger and head of the Natural History Museum in Bulawayo, in 1973.  He has published several books, and I am reading Orphans of the Wild, which was made into a TV series in the 1970's.  He is 80 years old now and lives in town.  His son, Kevin, and wife Nicky, and their children Michaela and Ryan now live in the house here and manage the property.  We go to the house to eat lunch and dinner on their patio.  It is usually prepared by their maid, Patricia.

Vivian (called VJ) has been sick and in the hospital lately.  Someone called the SPCA and said his animals had no water.  He has several house staff who take care of his animals, but we feared they had been slacking off since he wasn't around.  Nicole took the volunteers to his house to clean up his bird pond and huge aviary before the SPCA inspectors came the next day.  We did not have to deal with the snakes.

At Chipangali, we have several monkey cages, aviaries, turtle and crocodile environments, and a snake house.  There is a black mamba that is about six feet long.  These are the most dangerous snakes in Africa, since they do not run away, but are more likely to chase you.  Their venom is both neurotoxic and cytotoxic, so it affects the nervous system and body tissue.  There are also pythons, puff adders, and a cobra.

A highlight of the week was the soccer match of the Chipangali team versus a team from a Bulawayo church.  We lost, but had a great time. 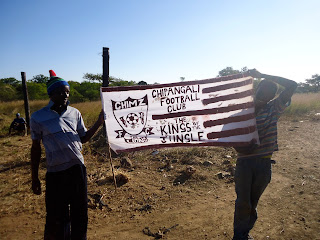 Posted by footloosemary at 8:23 PM No comments: