Today I took a "township tour."  First stop was Bo Kaap, where Muslim people live in the brightly painted houses which originally held former Malay slaves.
Then we went to the District 6 Museum, housed in an old church east of downtown that was one of the few buildings in the district not bulldozed when this formerly racially mixed area was declared a "white" (european) area and anyone not white was forced to move to a township.  The townships themselves were segregated into black, colored and Asian (mostly Indian and Indonesian) areas.  District 6 was formerly a lively area full of musicians, churches, schools and people could walk to work.  When they had to move, they lost their neighbors and sense of community.  They had to take buses or trains to go many miles to get to work, school, or church.  As families grew, they built shanties near their small one bedroom houses out of whatever materials were available to get extra room.   Workers from rural areas were allowed one bed in dorm like buildings.  After the pass laws (where everyone had to carry identification noting their race) were abolished, the workers brought in their families, who all shared the one bed allotted to the worker.  Needless to say, the townships became beyond crowded with much substandard housing.  Black children were considered to have no need to be educated since they were barred from most skilled jobs under apartheid, and schools are still underfunded compared to those in other areas.  School is still not compulsory, but children are fed at school, which gives them added incentive to attend.
Langa is the oldest township in Capetown (1926) and has about 100,000 population.  We spent about an hour walking around with a local guide.  It felt very clean and the people seemed busy, although the rate of unemployment is very high.  They seem to welcome tourists, as they bring in money to the community in the form of a percentage of tour proceeds and purchases of arts and crafts displayed.  Some of the houses had solar water heaters on their roofs, part of South Africa's effort for sustainable development.  The World Climate Change Convention was held here last year.  There are still many shanties, but we also saw new housing where shanties had been torn down.  We went inside several housing units.  They pay from $3 to about $50 per month rent and after 8 years they own their homes.  They cannot sell them, but if they move out they can remain in the family.  There is a waiting list for homes.  If they six or more people in the family they can get a two bedroom unit.  We also saw the Beverly Hills area of town, with bigger houses, gates, and driveways where the more prosperous and professional people have bought houses.  Apparently they can afford to buy in Capetown proper, but stay in the township to show the young people that they can get ahead. 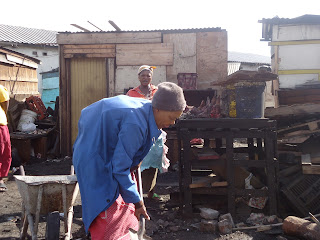 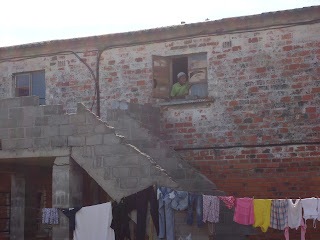 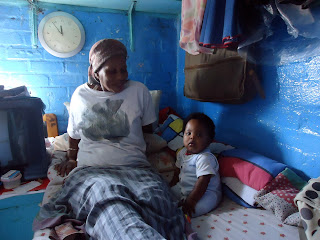 Next we went to Khayelitsha, another black township with about a million people.  We visited Vicky's B&B, originally a container (the metal kind they ship things in) and now has grown to a two story building with a balcony, kitchen, living room, and six bedrooms.  They have their own website and are listed in Trip Advisor and many other sites.  The owner's husband is a builder and the whole thing apparently grew haphazardly and beautifully with wood, tile, glass and whatever he could scrounge up.  We talked with the owner, who said she saw buses coming through the township on tours and people never got out of the buses, so she decided to start a B&B, and now there are 18 of them in the township with visitors from all over the world.  For myself, I am happy with the half day tour.  The guide did tell me that they have a problem with a lot of drinking and drugs on weekends, but the gangs are mostly in the colored townships, like the one I worked in near Muizenberg.  The black townships did seem a lot cleaner and more prosperous than Capricorn, even the shanties.  Which makes me think of the colored person I met in Johannesburg who told me that the blacks get much better treatment than the coloreds now that they control the government. 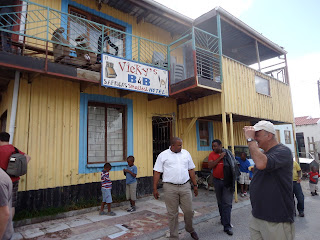 I went back to RCaffe for lunch to get the salmon pasta. They would not give me the recipe, but it is penne pasta with a cream sauce with roasted butternut squash, pumpkin seeds, sage, basil, and parmesan cheese.
In the afternoon, I walked to the Center for the Book, which was built in 1906 to house the University of the Cape of Good Hope and later was bought by the government as part of the National Library.  After the 1990's, it became a center to encourage reading and oral literature in many languages, including several native ones, to increase literacy in the country.
I walked on through the Company's Gardens to the National Gallery.  I thought it would have a lot of World art, like old Masters and such, but the main exhibits were of South Africans.  Peter Clarke, a black artist born in Simon's Town in 1929, left school at 15 to become a dock worker but persisted in studying art and became very successful.  His family was forced to move to a township, where he still lives, and his art was limited under Apartheid, but people helped him and he was able to study and work in Europe and the United States and has published several books.  The other main exhibit was colored ink drawings by Barbara Terrell, a white South African fashion designer who visited many southern African tribes during the 1940's to 1960's and preserved the way the people looked on paper, including women at many stages of life, shamans, men doing many activities, and chiefs.  This is an important record, since I doubt they dress the same way now.


I got back to Ashanti Lodge just before it started raining.
Posted by footloosemary at 3:21 PM