Every year the primary school I volunteer at has a track meet with two other Moravian schools in the area.  This year is special because it is the 60th and 75th anniversaries of the schools.  Christian David won last year, and we were hoping for a repeat win.
Our Sports volunteers have been working with the kids for several weeks.  It seemed very unorganized and the kids don't often listen to instructions.  They were like different kids the day of the meet, however, and all seemed on task.  We had three large buses pick us up at school at 8 a.m. then drove to a nice college stadium near Capetown.  The three groups of kids paraded around the track with flags then sat in the stadium until their events were called.  There were many running events, short and long jump, and discus throw at various age levels.  We had some very enthusiastic cheerleaders, although I could not understand what they were yelling since a lot of it was in the local language. 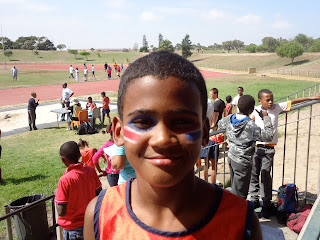 Our school ended up winning with almost 300 points.  The next best school had about 2/3 of that, and the last school only about 90 points.  The kids were ecstatic!  You would never know it by seeing them daily, but it shows they can pull through and succeed if they want something.  The school secretary had told me most of them only come to school to get the free food.  The township schools definitely seem underfunded when you see the facilities at the schools in wealthy areas, but improvement is possible if the community pulls together and the kids see they may have a future if they work hard.
Posted by footloosemary at 5:31 AM