Kate from Connecticut and I had a Friday off and took a tour around the Cape Peninsula, which includes some of the most beautiful beaches in the world, in my opinion.  Tom Cruise must agree, because he has a house in Clifton Bay.  Next to that is Camp's Bay, where many foreigners are snatching up million dollar plus houses, according to the Capetown newspaper.
We drove down the west coast to Houts Bay, which is incredible, and Long Beach, a miles long wide beach attached of miles of natural preserve land.  I looked down at the beach from above and saw two people on horseback riding along the shore and not another person on the whole beach.
The tip of the peninsula is a national park and includes Cape Point, near where the Atlantic and Indian Oceans meet, and Cape of Good Hope, discovered by Portuguese explorer Bartolomo Dias, who died in a shipwreck there, in 1488.
We drove up the east coast to False Bay, where there are more sharks than anywhere else in the world.  We had lunch near there then went on to Simon's Bay, a naval headquarters, and walked along Boulders Beach, where there are pretty stone formations and lots of penguins. 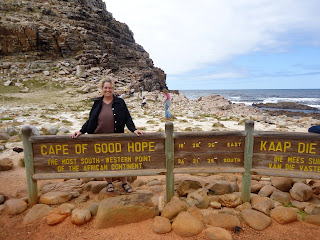 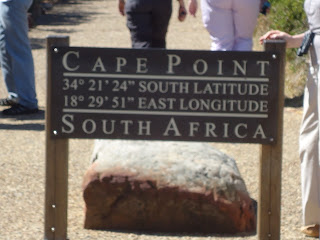 Posted by footloosemary at 5:58 AM