We got to Olasiti Lodge on the outskirts of Arusha on 12/24.  The OAT group left at 5 p.m. to catch their flight back to the U.S. and I was the only one of our group of 12 who stayed.  I did get lunch with them and an early dinner.  I was walking with some discomfort but it became much worse on Christmas Day and I had to stop several times just walking from my room to the dining area because of the pain in my knee from my fall in Serengeti a few days ago.  This was very discouraging.  I made it to breakfast and lunch and just stayed in the hotel lounge for several hours catching up on email with my laptop.  I was glad I had it and could use the wifi, because the hotel charged $5 an hour for internet.

They set up lovely tables around the pool for Christmas dinner with table cloths and .  We lined up at the buffet.  A large group of maybe 40 Japanese tourists were ahead of me in line so by the time I got to the end there was only a little piece of carved roast turkey left.  The chef said there was another turkey and to come back, but by the time I finished what was on my plate I was too full to eat any more.  So my Christmas dinner was mainly rice and vegetables.  There was pudding for dessert but I was too full for that, also.  I did have a glass of wine.  I made my painful way back to my room and took a couple of extra strength Tylenol, hoping things would be better in the morning.
The morning found me in much less pain.  I was able to walk pretty well and took a taxi to town to check into the East African Hotel Suites, which I had arranged on the internet so I could be in town for a couple of days before flying to Zanzibar.  I rested my leg the rest of the day, venturing out only for dinner at the hotel.  My room is much more than I expected, with a living room, bedroom, large bathroom, and kitchen, even better than my suite at the Grosvenor Hotel in London.  I had wifi but no controller for the TV, not that I was interested in watching it.  You really get out of the habit 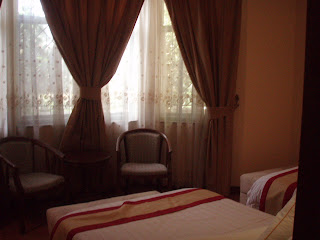 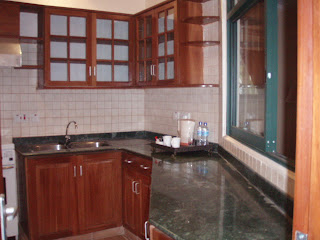 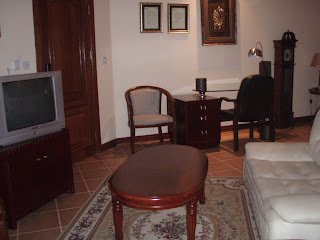 The next day I walked the half mile to town to try to find lunch and a pharmacy.  I met a couple of girls on the way who had just finished secondary school, and they accompanied me to town.  Soon after reaching town I met up with a Francis, who is a certified tour guide and showed me where to go the bank, market, etc.  We went to an outside cafe down a dirt road which had a view of the oldest church in town, from which emanated lovely music.  We chatted over coca colas and he advised me to go the Seriani Hospital, which is apparently where all the Wazungus go.  Walking from the cafe I felt a little dizzy, so I went back to the hotel instead of the hospital, thinking to go there later or the next day.  After a few hours, all I could manage was to go across the street to the Everest Inn for a late lunch.  It is a Chinese restaurant and has some rooms in the back for travellers.  I had a pizza and beer and went back to my hotel.
Posted by footloosemary at 12:33 AM