We drove through the Ngorongoro Conservation Area with a stop at Oldupai Gorge, where Louis and Mary Leakey discovered fossil remains in 1959 that led to a new understanding of human evolution.  When I was here in 1975, our guide was a relative (grandson?) of the Leakeys.  I just remember a river bed with lots of rocks.  Now there are signs of more extensive excavation.  Mary Leakey discovered the remains of human footprints at a site nearby in 1976.  Presently the site is more set up for tourists, with a gift shop, observation deck, museum, and formal talks.  The dirt road to get here is still awful, with signs of many cars going off road to get through muddy and rocky areas.
The Ngorongoro Conservation Area contains woodland and short and high grass areas.  It is a mixed use area, so the Masai are allowed to live there and raise their livestock, unlike in the National Parks.  We saw many giraffes, zebra, Thompson's and Grant gazelles, and cape buffalo.  We also saw part of the wildebeest migration, and could see thousands of animals in front of us to the distant horizon.  Debbie spotted a cheetah, which turned out to be a family of four walking casually across the grassy plain.  They came upon a group of Thompson's gazelles, who faced the predators with their little tails going very fast.  The cheetahs watched them for awhile, but seemed to lose interest and laid down beneath a tree.  The gazelles ran away.


Finally we reached the main gate into Serengeti National Park and stopped to have a picnic lunch of sandwiches and other goodies we had put together at the lodge that morning.  We drove another hour or so to Alan Root Tent Camp, a mobile camp named for a photographer for National Geographic who stayed here for about six months.  His viewing platform remains up in the rocks, but the tent camp itself is mobile.  It will be here for awhile, though, and is one of four OAT tent camps in Serengeti, so our group of 12 is the only OAT group here, unlike Tloma Lodge, where we saw two other OAT groups coming and going.  We are here for four nights. 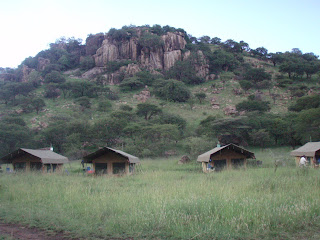 Driving here was a game park drive in itself.  We also went out for a few hours the next morning and saw many animals, including a leopard lounging in a tree.  This is apparently a rare sighting.  Peter told us that sometimes this time of year there would be 50 tourist vehicles around the tree.  There were about 7 coming and going while we were there.  We drove on and saw lions, hippos and one crocodile.

There was a scheduled game park drive that afternoon after lunch and a rest, but it started raining after about five minutes and all the animals disappeared.  The road to the camp, which was already a quagmire, turned into a river.  Peter's vehicle turned back, but our driver, Stanley, wanted to go on across the river.  We could not go over the wooden bridge and went up the road to the concrete bridge.  Water was rushing over the top of it so we told him to turn around and go back.  We were slipping and sliding up the road, now about 2 inches deep or more in the previous big ruts which were now difficult to see.  Stanley kept saying "Hapuna mikata" or "No worries" or "Piece of cake."  About five minutes from camp, the weather cleared and we started seeing impala and topi again.
I share a tent with 24 year old Nicole.  Our tent has 4 sections: the main room, with two twin beds, a table and chair; the narrow room in back of that, with solar battery on one end and luggage rack on the other; the toilet area; and the shower area.  There is also an open but covered front part with canvas sink, mirrors, table, clothesline, and lantern holder for the light they put out every night.  We get 5 gallon buckets of hot water before dinner so that we can take showers.  They put the bucket on top of the shower part of the tent and you pull one string to get water and one to stop it.  The idea is to get wet, soap up, then rinse off.  I did not take a shower the first night because I had one that morning.  Last night I took one, stepped out onto the mat in the middle room, which slants downhill, and the mat slid out from under me, causing me to fall hard on my right knee, the one that the black and blue from the fall in Moshi a week ago was just fading from.  I had some twinges that evening, but it got more painful that night so I finally got up and took some Extra strength tylenol, which helped me go back to sleep.  In the morning it hurt to move but felt better standing up.  I got some more pain medication and an Ace wrap from BJ and Ellen, our Jewish mothers, and decided to skip the all day game drive today.  It hurt more when I bent my knee, and the Landcruisers are really rough on the muddy roads, with continual bracing of your body.  I had nightmares about needing knee surgery for a torn ACL or some such.  I doubt they have any MRI scanners in the whole country, and I don't think my trip insurance covers repatriation, since I came here on my own with frequent flyer miles.  Hopefully a day of rest and keeping my leg up will improve things.  At least I am catching up on writing my blog, even if there is no internet here to send it.  We are in the middle of Serengeti National Park, which is the size of Connecticut, with no permanent buildings for miles around.
The group got back from the game drive and reported four lions in a tree 350 yards from our tent compound.
Posted by footloosemary at 3:30 PM