WALKING WITH THE LIONS

Morris, the Jamaican Canadian I met on the Chobe trip, had been a volunteer for several weeks at the Lion Walk, an NGO that is helping to reintroduce lions into the National Parks in Africa.  Studies show that the lion population in Africa has dropped 80-90% in the last 30 years, from 200,000 to as low as 16,000.  At this rate, there will soon be no lions left outside of zoos.
They raise lions and accustom them to people, so they can raise money for the project by having tourists walk with the lions.  They are well fed and kept from harm, but they don't discourage their instinctive hunting behaviors.  At age two, the lions are sent to another reserve where they are still watched and fed when needed, but left more on there own with no unecessary human interaction.  Their cubs are totally wild, and are sent to various game reserves in Africa to repopulate.  There are only a few lions in the project at a time, so it is a slow process.
We all carry long sticks.  If the lion gets aggressive in any way, you either tap him on the snout or put it between his teeth to distract him.  We walked for about half a mile with the lions. 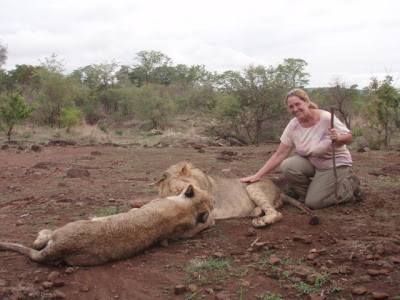 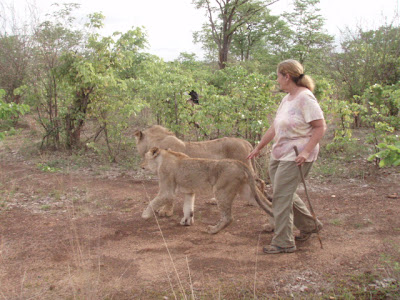 Posted by footloosemary at 10:41 PM