On Friday, 12/2, I flew to Victoria Falls, Zimbabwe.  I usually don't go back to places I have travelled to, preferring to see something new, but this is one of the favorite places I have ever been and I couldn't resist.  I made the arrangements from Kigali, where I finally had good internet access, and went through several African and American search engines before I booked through Expedia.  It is not a cheap trip at about $2000 for the week, including airfare to and from Johannesburg.  The last time I was here, in 1976, the country was still called Rhodesia and Mugabe was a guerilla in the jungle.  The only thing around here then was the Victoria Falls Hotel, which opened in 1904, and the campground, where I stayed.  I spent some time at the hotel because my friends and I met and partied with a rugby team from Durban, South Africa, who were staying there.  The hotel was dark at night due to the civil war going on and proximity to the jungle.  Everything around was kind of shabby at that time and you could walk anywhere.  Now there are fences restricting access to the falls and you can't see anything unless you pay $30 to get in, or $7 if you are Zimbabwean.
The Victoria Falls Hotel has been refurbished and is now 5 stars, and would have cost me an extra $1000 to stay there for the week.  I did go there for lunch one day.  I considered getting the crocodile caesar salad, but opted instead for a chicken and bacon salad sandwich and Zambezi beer, which were both delicious.  There are many pictures on the walls of the Royal family stay there in 1947, including King George and his wife (remember the King's Speech?) and young Princesses Elizabeth and Margaret.  At that time the Solent Flying Boat Service would fly you from Southampton, England to Johannesburg with a stopover on the Zambezi just above Victoria Falls, where all passengers disembarked and stayed overnight at the Victoria Falls Hotel.
My hotel, the Kingdom, is next door and has the same management company.  It is fairly new, built around 1999.  The floors are all 12 inch tile and everything is earth tones.  I had an upgraded room with king sized bed, refrigerator, coffee pot, TV, and a good sized balcony overlooking a stream and waterfall.  They don't have internet in the rooms, and it took me days before they could figure out how to connect my Apple laptop to wifi in the lobby, so I didn't get anything done on my blog.  I hadn't seen TV for about 5 months but am out of the habit.  I turned CNN on a few times but could not stand it for more than 5 minutes. I did watch The Hangover one night at 2 a.m. when I couldn't sleep.  Cute, but I can't figure out how it got Best Picture Oscar.  There is a casino on site but I only walked around it once to check it out.  My first morning I heard a lot of rustling leaves of the big tree outside and thought it was the wind, but it turned out to be monkeys.
I was here at high water time before and the falls were amazing.  They are twice as high and wide as Niagara Falls.  This is probably the lowest water flow of the year, so not nearly as impressive, but the falls were still obscured in places by the mist.  Cloudy so no rainbows.  There were lots of foreign tourists, which I did not see here before.  I was kind or surprised to see lots of African tourists also.  About half the people at breakfast each day were black.  They had a great breakfast buffet, which was my only "free" meal of the day so I loaded up and snacked most of the other meals. I had bought two bottles of wine at the duty free shop at Johannesburg Airport, which was more than enough for the week.  The only wine you can buy at my village in Tanzania is Altar wine, which is sickeningly sweet, so I enjoyed relaxing in the evening on my balcony with a glass of wine and my kindle.
After I walked to the falls, I went across the bridge which connects Zimbabwe and Zambia.  When it was built, it was the highest bridge in the world.  Now they have bungee jumpers in the middle of it.  I watched them go down (a 365 foot drop), and it really made me queasy.  They have to stay upside down a long time till they are pulled up, and I imagine that would cause quite a headache, especially since your adrenaline already has your blood going fast.  I also watched a tandem jump, where two people jump and swing out quite a ways back and forth until they are pulled up.  At least they stay right side up. 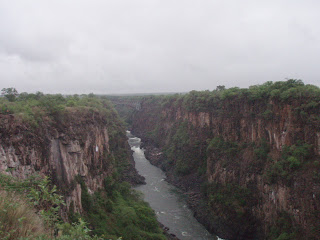 On Sunday evening I went on a sunset cruise on the Zambezi River for $40.  It was pretty leisurely and I drank wine and watched lots of hippos and birds.  Not near as many animals as I saw on the Nile River in Uganda, though.
Posted by footloosemary at 9:35 AM