We had four nights total in the tent camp in Serengeti.  The food was always fabulous.  Breakfast and lunch were usually buffets, and dinner was served to us.  Drinks (wine, beer, soda) were unlimited.  My favorite was the barbeque chicken pizza, but the chef also did great soups, spaghetti, banana stew, pork chops, and salads.  I have probably gained back a lot of the 25 pounds I lost here just in these few days.
After a couple of hours' drive, we reached the rim of Ngorongoro Crater, a large, level, mostly treeless plain teeming with animals.  There were many baboons at the top. We were unable to see the crater due to clouds that hung over it, obscuring the view below.  It felt very mysterious, like you were descending into a lost land.  The road down is steep and you need four wheel drive to negotiate it and the occasionally muddy dirt roads at the bottom.  One of the first animals we saw was a hyena carrying an antelope in its mouth.  There were many wildebeests and zebras, which seem to go together.  We also saw abdini storks, lions, crested crown finches, and elands.  There were hundreds of pink flamingos at the lake on the bottom of the crater.  The most notable sighting was of three black rhinos, since they are so rare, but they were at such a distance I could barely make out their shapes, much less take a picture.  I have now officially seen all of the "Big 5" though.
After Ngorongoro, we headed back to Tloma Lodge for two nights.  While there, we visited Bashay Primary School outside of the town of Karatu.  The vice principal took us on a tour of the school, including a schoolroom and kitchen built with Grand Circle/OAT funds.  We had been encouraged to bring gifts for the school, and they got quite a haul of pencils, pens, soccer balls, stickers, and the like.
We also visited crafts markets and a local village which specializes in brickmaking.  They are seeking an ecologically superior alternative because they need to cut a lot of trees for wood to get the hot fires needed to make the bricks, causing concerns about deforestation and air pollution.  So far they have not found one, and the village needs the income from the bricks.

We visited a family home in the village, and they offered us food, songs, and dancing.  My roommate was adopted as a daughter of the family.  Everyone enjoyed themselves. 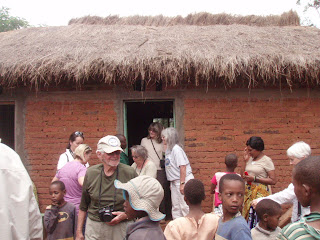 Posted by footloosemary at 10:44 AM