We drove to a Masai village this morning and were welcomed by one of the chief's sons.  He showed us how to get blood from the cow's neck and we were invited to drink some.  I just put some on my finger and tasted it.  Not as strong tasting as human blood.

We then watched them building a new house and traditional round hut.  They use branches held together by wire for the frame then pack the holes with mud.  They use a steel roof but it is covered by thatch for shade and sound purposes.  We were invited to come on the roof and help thatch, but only Helga, who is in her 80's went up.  Lots of us don't like heights.

The women came in a line from behind a building singing and dancing.  They then had the women in our group put on traditional Masai robes and beaded neck circlets.  We danced.  It is really hard to get those beads to bounce on your chest.  It's all in the shoulders.  Some of the Masai men then lined up to sing and took turns showing how high they could jump.  The Masai women then led us up to the men to  be "claimed."  We got hugs and then went back into our own line. 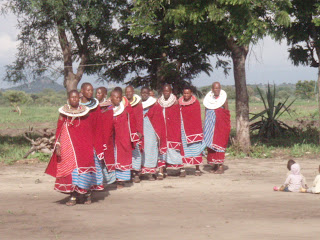 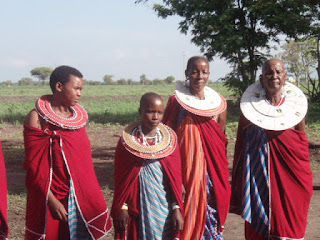 Afterwards, we went into a traditional round house.  It has a square central room with firepit in the middle.  The smoke goes up a hole in the roof.  There are four "rooms" created around the circle, for storage, cattle, and sleeping.  At first the head man asked and answered questions.  Their wealth is in cattle, and that is how they pay for land, dowrys, etc.  Our guide told us that after 9/11 the Masai took a lot of cattle to the American embassy for the workers who were helping rebuild.  They have no concept of how far away America is.
Then the man left and some women came in.  They did not speak any English but our guide translated.  They are all wives of the clan's sons.  There is a patriarch and  his first wife is the matriarch.  They can have more than one wife, but each wife builds her own separate hut.  The women asked how long we nursed our babies.  They nurse for 3 years and do not have sex during that time.  They were surprised to find out that is not our custom.  They asked if the sperm did not go up to the breast milk and harm the baby.  This abstinence could be a reason why the men take more than one wife.  Our guide was translating and got very embarrassed by the personal questions.
We left the Masai and went to a Makonde tribe woodworking shop about an hour away.  They make carved animals, bowls, masks, etc and sell them to tourist shops.  I bought some rosewood salad tongs.
We drove past Lake Manyara and finally we came to our hotel for the night,Tloma Lodge.  It has huge gardens and they make and process coffee here.  We were welcomed with lemon grass juice and cookies with chocolate drops in the middle.  We had a beautiful buffet lunch, all very fresh.  They also had spaghetti with meat sauce, shepherd's pie, zucchini casserole, ugali, and two kinds of quiche.
Peter, our guide, took us on a one hour walk around the gardens.  They are very extensive with many fruit trees and herbs, as well as long rows of many kinds of vegetables.  Different kinds of lilies border much of the garden.  Banana and papaya trees shade the coffee plants.
According to our driver, Stanley, the dread locked young man we saw in the lodge owns this one and 69 others.  He also owns 600 Kibo company trucks, which he sells to other tour companies after 5000 km (about 3100 miles).  He is half German but was raised by his Tanzanian mother.and never knew his father.  Quite a success story.  OAT contracted with his company so we are staying in several of his lodges and using his trucks and drivers.
Posted by footloosemary at 2:32 PM