On Thursday we got in two Landrovers with drivers Peter and Stanley and headed for Taranguire National Park.  On the way we stopped at Trek Africa Art Studio.  The artist showed us some African art.  I did purchase one of his paintings, a very colorful market scene done in oil, but bargained him down from $450 to $300 and he will pay more than half of the $70 shipping fee. 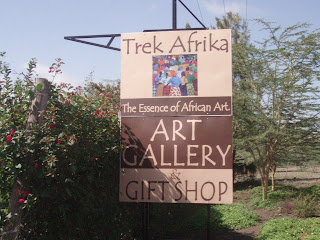 We passed many villages with round grass huts and herds of goats and cows with young Masai shepherds.  Finally we reached the entrance to Taranguire National Park and stopped at their picnic area to eat our packed lunch.  After that was a 3 hour game drive during which we saw lots of elephants, warthogs, giraffes, ostriches, a bat eared fox, impalas, water bucks, banded mongoose, slender mongoose and dik diks.  We saw three lions sitting together in the sun but they were at such a distance I could not get a good picture.  Also interesting were the many termite mounds, which the termites build with saliva into large rust colored castle like fortresses.  They have large holes which mongoose and snakes inhabit.  We saw lots of birds, including Egyptian geese, guinea fowl, leopard striped swallows, reddish ploverine, white headed buffalo weaver, superb starlings, southern ground hornbill,  red headed spotted hornbill, reddish frankoline (quail), and colored lovebird, Not that I would recognize any if I saw them again. 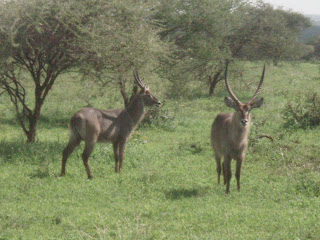 We went to our hotel for the next two nights, Lake Buringe Tent Camp.  We have huge permanent tents with wooden porches and atttached baths.  You can see the lake in the distance from the terrace of the main building.  I sat there drinking a glass of wine and watching a huge rainbow form.  It seemed like a good luck sign for our trip.  Dinner was a nice buffet.  When it is dark (after dinner and early morning), Masai with spears escort us back and forth to our tents because there is a lot of wild game in this area.

The next day we got up at 5:30 a.m., had coffee, bread, jam and cheese, and took off for our morning game drive.  There are tse tse flies here so we were told not to wear black or dark blue, which attracts them.  We saw many of the animals we had seen the day before.  There were many more elephants.  We were told the park is about 9,000 square miles and has 4,500 elephants.  We saw a few hundred, including many babies.  One young male trumpeted at us as a sign of warning, but seemed to conclude we were bigger so he eventually walked away.
Additional animals we saw were zebra, dwarf mongoose, vervet monkeys, squirrels, hartebeest, and water bucks.  Birds included yellow necked spur fowl, vultures, wattle starlings, yellow necked spur fowl, marshall eagle, Von der Decker's hornbill, northern white crowned shrike, morning doves, tawny eagle, fish eagle, ibis, owlet, red chested cuckoo, fork tailed drumbo, orange bellied parrot, kingfisher, red and yellow barbet, and red bellied hornbill.  I am not a bird person, but include a lot of the names just to show the variety.  There is birdsong all the time.
We drove back to our lodge and had lunch, including a variety of African dishes and spaghetti Bolognese.  After a rest we had a nature walk with a local guide and a Masai with spear.  They showed us the purposes of many plants and also a lot of animal tracks in the dry, sandy river bed, including hyenas and jackals, which I have heard but not seen.
Posted by footloosemary at 2:10 PM