CANOEING WITH THE HIPPOS

I decided against whitewater rafting because you had to go up and down a huge mountain of steps with no handrails to get to the river, which would be difficult for me normally, and more so because my recent health issues have made my sense of balance worse and I am more prone to falls.
Instead I went canoeing this afternoon on the Zambezi River between Zimbabwe and Zambia.  There were national parks on both sides so it was complete wilderness except for a few isolated resorts along the shores.  My companions were an Australian couple, Sam and Deb, and their three daughters, Rachel, Miriam, and Lizzie, ages about 8 to 18.  Their fourth daughter is studying in France. We had two people to a canoe, and I shared with Obit, one of the two guides.

There are lots of islands in the river, so we were actually in Zambia part of the time.  There were a few sections with small rapids and some whirlpools, which just made the canoes spin a bit.  Of course you get wet canoeing, but the water was wonderfully warm.  When I get on my homepage, I read that the temperature in Asheville has been in the 20's lately and it does not seem real here in the Southern Hemisphere.  It is much hotter here than it was in Ngara or Kigali, ranging from 75 to 85 degrees. 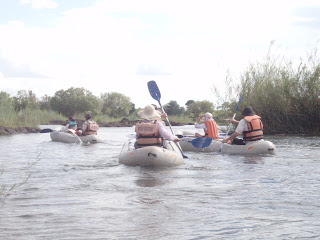 We saw lots of hippos, who are supposed to be the most dangerous animal in the water in Africa and kill many people every year.  Our guide seemed to know which groups had baby hippos, which would be especially dangerous to go near.  At one point one of the hippos opened his huge mouth wide and showed all his teeth, which Obit told me was a sign of agression.  They usually just stand in the water with their eyes and ears showing, but this one came after us.  He was getting nearer but luckily we came to a set of rapids and left him behind.
In the evening, I went to the Boma Restaurant at the Safari Hotel.  A driver picked me up, as well as a Spanish couple staying at the Victoria Falls Hotel who spoke no English.  He needed me to translate since the husband did not come down right away and he could not understand why.  They have a great buffet with lots of wild game, both grilled and in salads.  They also had dancers and singers.  They gave us drums and we all had a great drumming session that he directed.  Later I danced. 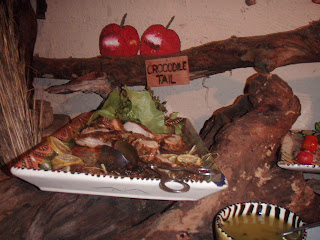 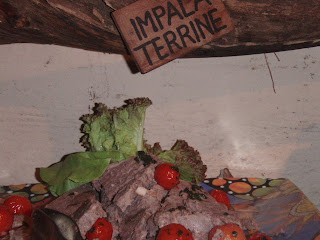 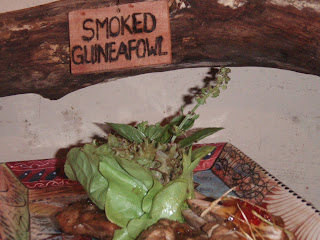 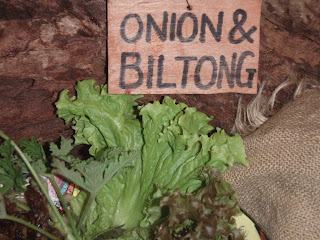 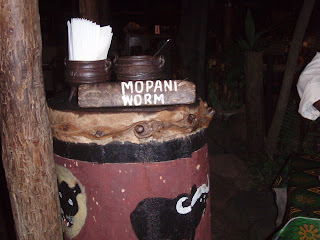 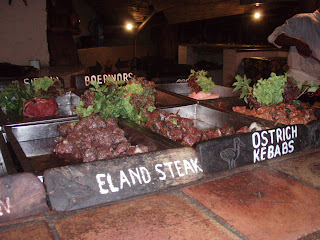 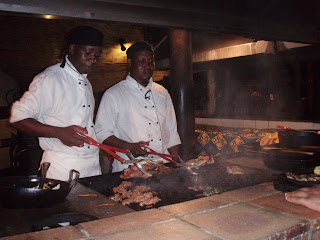 Posted by footloosemary at 10:50 PM