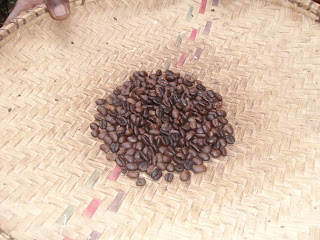 After walking back to the reception area, my guide, driver and I  got a lunch of banana soup, rice, beef stew, vegetable stew, cooked bananas, and a tomato and cucumber salad.  There was one other tourist there, a Japanese woman who was just finishing lunch with her crew when I came.  They had apparently had a group of tourists overnight, and were taking down the tents they had used.  The overnight tourists get the coffee tour the first day and then a choice of nature, traditional medicine, or  Chagga village walk the next day.   I had told my guide, Dennis, that I was a nurse so he showed me a lot of the plants used for swelling, bleeding, emetics, congestion, etc as we passed them.   He also showed me how they twist leaves in different shapes to give messages, like "banana beer for sale at this house."
By next year, the plan is to have a paved road all the way there.  Both the currency and coffee prices fluctuate, so they have been looking at tourism as a way to bring in a more stable income and provide some jobs for the community.
Posted by footloosemary at 1:15 PM