On 12/28 I took a taxi the half mile to the Precision Air office for 4000 shillings ($2.75) then paid 10,000 shillings ($6.75) for the one hour drive on their shuttle bus to Kilimanjaro Airport.  My flight to Zanzibar was on a small propeller jet.  At the airport I got a taxi to Stonetown, the main city on Zanzibar Island, for another 10,000 shillings for the fifteen minute drive.  Ashley, WorldTeach program manager for Tanzania, met me at a tree the taxi driver seemed to know and we walked through the maze of streets to the house I will be staying at.  Ashley has arranged rooms in houses for all 15 volunteers except Lisa, who is staying on the north part of the island with her family, who are visiting for the holidays.  At present, I am the only one in my house.  It has two bedrooms, two baths, a living room, large balcony,  and kitchen.  There are ceiling fans in most of the rooms and a portable air conditioner in the living room.  The power goes off every day sometime after 6 for 20-40 minutes.  There was rat feces in the bathrooms when I came and I detected a rat in my bathroom the first night.  I didn't see any evidence of them after I covered the bathroom drains with plastic buckets filled with water.  There were roaches in the Kitchen sink, but we didn't use it much except to get water to boil and  rinse out coffee cups.
Ashley took me for lunch and on a short introductory tour of the neighborhood, but I got really confused about the directions.  Stonetown is like a huge maze of mostly 2-3 story whitewashed buildings with alleys going every which way and few that go through.  There is a road about 1/4 mile one way and the ocean is about 1/4 mile another way, but you have to get through the maze to get there. My sense of direction is terrible and I got turned around very quickly.  You just keep walking until you hit somewhere you recognize and can reorient yourself.   Zanzibar is over 99% Muslim, but the people seem very friendly and helpful and several times walked with me to show me the way somewhere.  I stayed close to my house the first day because I was afraid I would never find the way back.  My house is number 46, but I never heard a street name, if there was one.  I made it to Zanzibar Coffee House the first morning.  They wanted 20,000 shillings (over $13) for breakfast so I just had coffee and a small croissant for 6,000, which is quite expensive for Tanzania so I don't plan to go back there.  Dinner was fish, rice and vegetables at the Spice House for 16,000 shillings.  I ate at the rooftop restaurant which had a good view of the city.
After a couple of days Gretchen and her boyfriend Ben showed up to take the second bedroom.  It was nice to have some company to go out to eat and explore with.  I was decided that our house had the largest living room space, so we had the Midterm conference there on Saturday, during which all the volunteers met to share the good and the bad about their placements and what could be done to improve things.  I am the only one not returning, but a lot of the others seem more than a little depressed to be going back, especially Nicole and Lindsey, who went home to the USA for Christmas.  Everyone seems to love their kids, but the living situations are difficult for most everyone.  There is some trepidation about the rainy season coming up, when a lot of them will be isolated as the dirt roads to their villages become impassable.

A favorite tourist hangout is Livingstone's, a restaurant/bar on the sand.  It is next to the automobile ferry, and I sat there one afternoon drinking a beer and watching the cars rev up one by one to make the 50 yard dash over the sand to the ferry ramp, trying not to get stuck.  If you slide back down the ramp, you are almost guaranteed to get rear wheels stuck in the sand, necessitating a crew of men with logs, boards, etc and a rope tow from a vehicle already on the ferry to get you out.  the minibuses and trucks with long wheelbases seemed to have the most problems.  There were cheers from the bar
patrons after particularly long and difficult extractions.
I enjoyed a few meals at Archipelago, an outdoor rooftop restaurant overlooking the water.  They have a good breakfast of scrambled eggs, toast and tomatoes for 5000 shillings and lunch or dinner of fish and vegetables for 12,000.  I assume the fish here is very fresh, since it is the livelihood of many of the island.  I had marlin and swordfish while here.


Our last group dinner was at Amore, an Italian restaurant and ice cream parlor, also with an outdoor patio overlooking the ocean.  I had a great vegetarian pizza.  No alcohol here.
One day I took an all day Spice Tour. The minibus picked me up around 9 a.m. and took a group of us to a family spice farm for a tour.  We saw cinnamon trees, nutmeg, jackfruit, cloves, vanilla, peppers, and many more.  I was interested in the pineapple plants, that only put out one fruit at a time that takes a whole year to grow.  I am surprised they are so cheap, although they cost twice as much here as in Ngara.  At each stop they gave us a sample of the fruit or spice to smell or eat.  Spices apparently used to be a main export from here, though not anymore as Indonesia and other countries have taken over the market. 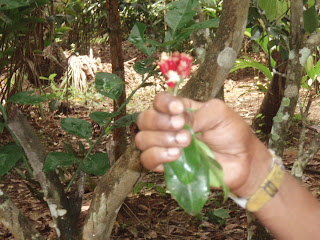 The other big Zanzibar export was slaves.  An Omani man came here and established himself as sultan in the late 1800's and the family ruled until the revolution in 1964.  They had a big slave market in Stonetown that brought slaves from the mainland and exported them to mostly Arab countries until the British shut down the slave market by force in 1879.  Slaves to America were sent from the West coast of Africa.  There was apparently still a clandestine market, because after the spice tour we were taken to a huge cave on the coast.  There were stairs down but during the slave times they were lowered on a rope into the cave, which had a stream running to the ocean on the bottom with fresh water.  They kept up to 200 slaves there, who had no way out except to walk to the opening to the ocean, which was gated and guarded.  From there they would be ferried to the waiting slave ships.

Near the cave you could walk about half a mile then down some steps to a great beach.  The water was very blue and clear.  We stayed there awhile before getting back on the minibus to return to Stonetown.


The other volunteers left Monday, Tuesday and Wednesday to return to their school sites until I was the only one left.  I was able to stay in my house for 15,000 shillings ($10) a night until I finally left on January 6 for Arusha to pick up my luggage at the hotel.  I stayed in Zanzibar almost two weeks and enjoyed it very much.
On returning to Arusha, I checked back into the East Africa Hotel Suites.  Unfortunately, it cost $180 a night, unlike my initial two nights which I arranged on an internet site.  Needless to say, I checked out the next day and went across the street to the Everest Inn, where I got a room for $40 for two nights.  It is run by a small Chinese man who came to Africa in 1984 as a young man and ended up staying.  He is running the restaurant and hostel by himself with African help, but says he cannot leave because he can't find help that could manage the place while he is gone.  His only son is in a radiology residency in Canada and probably will not return for a long time.  So if anyone is looking for a job...

Posted by footloosemary at 12:47 AM