Last night Leah and Ava from Canada and Cassie from Australia and I went to an outdoor concert at the National Theater in Kampala with Joshua's brother, Regan.  I was glad he could take us there and back in his van.  Joshua was going to take us, but part of the way there he got caught up on the phone in getting the body of a former student who died of AIDS to his grandmother's village 60 km away for a funeral tomorrow, and called Regan to meet us and take us the rest of the way.  Traffic is horrible, with cars just pushing their way into traffic and boda bodas (motorcycles) weaving their way precariously between the other vehicles.  I was told by several people that a lot of them get killed every year.
The concert was Percussion Africa, and consisted of a lot of drums, saxaphone, singing, dancing, etc.  "Whitney' came out a couple of times and sang/read African poems in Luganda.  I couldn't understand the words but they sounded good and were accompanied buy drums.  There was also a Down's syndrome male member of the band who played the marimbas and danced.  I got up a couple of times to join in the dancing, but it was a lot of fun just to watch, as some of the Africans who got up were very entertaining in their dancing. 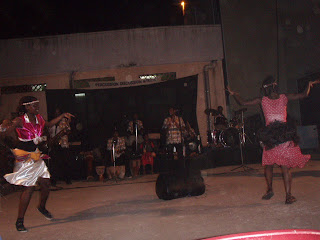 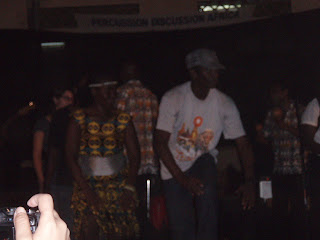 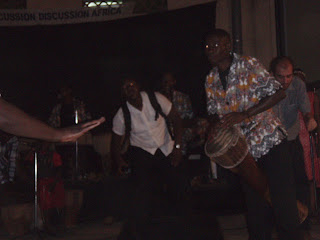 Posted by footloosemary at 1:33 AM