We reached Ghana ahead of schedule and just hung around offshore until the pilot boat could take us in the next morning.  They were supposed to meet us at 8 a.m. but didn't show up till about 9:30 because they couldn't get their boat to run.  Very reassuring!  A least we didn't have to go through face to face immigration, just get off the ship. 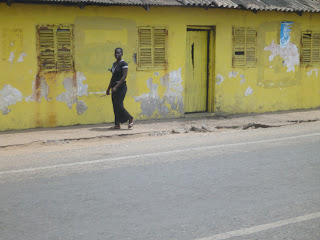 I took a city tour of the port city, Takoradi, and the historic capital, Sekondi.  Takoradi is not as important a port as Tema, near the current capital city of Accra, but carries cargo to and from neighboring countries like Ivory Coast that do not have their own ports.  It is also important for the oil and gas industries.  That must be where the good jobs are, because we passed several schools highlighting training in those fields.  The port has huge piles of manganese and bauxite waiting to be loaded.  Gold is the number one export.  The country was called the Gold Coast before independence.  Cocoa, forestry products, and tourism are the next most important industries.  Our guide said that Ghanian chocolate is the best in the world.  I tried some, but can't tell for sure.  I think my taste buds are used to a higher fat and sugar content.

A lot of the stores have crazy names like "Jesus is Alive Electronics," "Hands of God Market," "By His Grace Fashion," and "God's Blessing Furniture."  The missionaries apparently really did a number on these people.  There are a lot of churches of all faiths here, including Jehovah's Witness and Latter Day Saints.

Sekondi is the old British colonial headquarters.  We passed the old British administration building, post office, and train station.  They look like they were abandoned hundreds of years ago, but independence was only in 1957.  People drive on the right side of the road, and I originally thought the Ghanaians did what the Burmese did in changing to driving on the right side of the road after independence in protest against colonialism.  I was told that when the Economic Community of West African States (ECOWAS) was organized only 5 of the 17 member countries were former British colonies, so they went with the majority and changed to driving on the right side in 1974.  I feel more comfortable with that, but it must have been very confusing at the time.  Most of the cars here are used cars from Europe and the USA and at least ten years old.  I didn't see any left hand drive cars, unlike Burma. 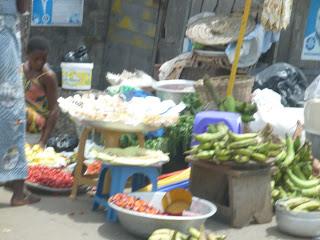 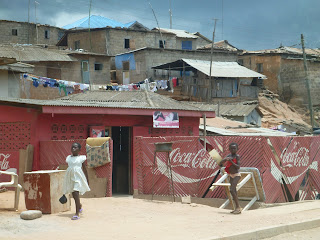 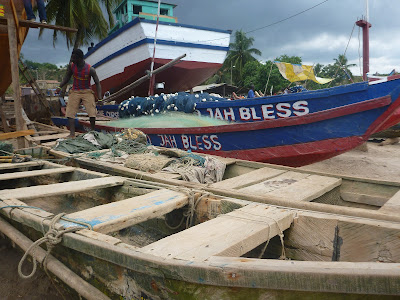 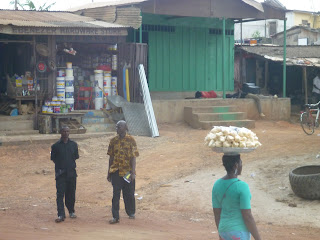 We went to a fishing village.  The housing consists mostly of mud walls and tin roofs.  We saw some fish grilling and boat building.  The village is very poor and has open sewers running through it.  A lot of the kids have distended bellies and missing teeth.  The people were very friendly, though.  The little kids and the adults all seemed to enjoy talking to us.   I expected Ghana to have a fairly good standard of living, but this is much worse than the South African townships.  There are very few nice modern buildings or houses in the area. 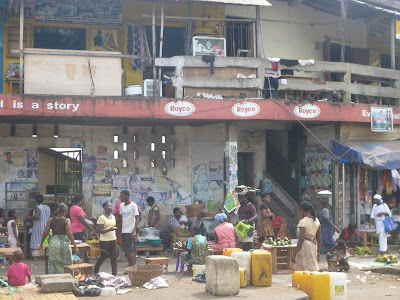 We drove by the "European" area, where only whites used to live.  They still have a nice sports club with golf course and a few decent looking hotels.   My guide says they do get a lot of tourists here.  There is not really a lot to see, though, since there is no "downtown" or historic buildings that aren't ruins.  We had lunch at a decent restaurant.  It was a buffet of white rice, spicy rice, plantains, chicken stew, ribs, and fish.  For dessert we had ice cream.  We had been warned against dairy and I hope I don't regret eating it.  Time will tell.

Our last stop was at the main market.  It is a lot of stalls over a big area.  There were a lot of narrow paths through it and we just wandered around for awhile till we found our way out.  There is not really anything you would want to buy.  A lot of vegetables, fish, lengths of material, pots and pans, etc.

Back at the ship I visited the nearby duty free warehouse area and bought some beers for $1 each.  Better than paying $3.50 in our faculty lounge.

Posted by footloosemary at 4:41 AM