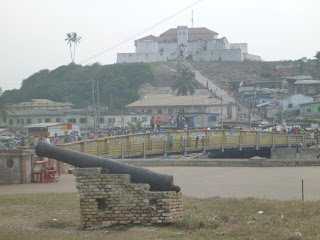 The next day we headed to Elmina Castle (aka St George's Castle), the oldest European building in the tropical world.   The Portuguese first came to the area in 1471 looking for a route to the Indies, then built the Castle in 1632, ten years before Christopher Columbus made his famous voyage.  In 1637 it was captured by the Dutch and was under control of the Dutch East Indies Company until it was sold to the British in 1872.

We entered the Castle and came to a huge courtyard.  On one end is what was the oldest Catholic church in Africa.  When the Dutch came, they removed the tower.  It later became an Anglican church, ironically sitting above the male slave dungeon.  It now serves as a museum.

We wandered into a smaller courtyard on the side.  They used to keep 400 female slaves in the adjacent area, chained to each other.  All feces, urine and vomit were left on the floor.  Comely slaves were taken to the courtyard.  The governor had a balcony overlooking it and could have his pick of slaves.  The ones who refused to be raped were tied to a cannonball in the courtyard and given no food or water.  Pregnant slaves were taken to houses in town and used as domestic slaves.

Male slaves were kept in an area on the other side of the main courtyard.  There were small cells with little light or air.  European soldiers would be kept in there for punishment for an hour or two.  Condemned black men were kept in there with no food or water until they died. 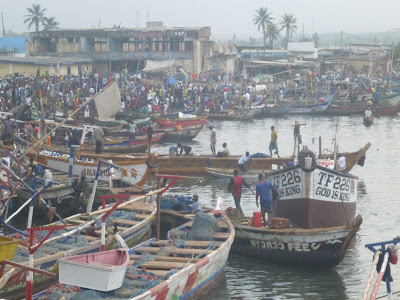 Those who survived the hellish conditions were taken 300 at a time down a narrow passage to the "roof of no return"  and loaded onto ships.

We then proceeded to Cape Coast Castle on the other side of the bay.  This was built by the British in 1663 to handle the ivory and captured slaves.  It was the administrative center of the British colony until moved to Accra in 1877.

The captured slaves were chained and shackled together in a stone room with one small high window and fed twice a day.  A small trough in the floor captured the flow of urine.  Piles of human waste were kept on one end of the room.  Those who died had their bodies thrown off the ramparts into the sea.  Condemned slaves were put in an airless room that held up to 50 slaves. shackled together.  When they all died the whole group was disposed of.

Female slaves were kept in another area chained so they lay head to toe.  The pretty ones were put in a front room and used by the soldiers.  After a minimum of six weeks the survivors went to the "gates of no return" to be loaded onto slave ships. 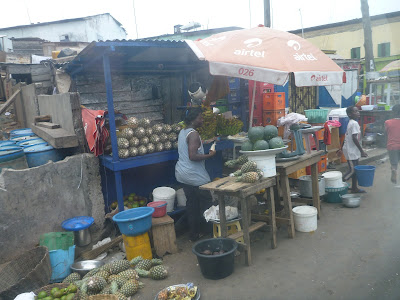 A plaque was placed on the walls of both castles by the Pan African Council in 1992.  It reads:

"In everlasting memory of the anguish of our ancestors.  May those who died rest in peace.  May those who return find their roots. May humanity never again perpetrate such injustice against them.  We the living vow to uphold this."

Another plaque commemorates the visit of Barack and Michelle Obama in 1999.

We went back to Elmira for lunch at an old fort building turned into a restaurant. We passed Ft. Amsterdam, which was given by the Dutch to the British in exchange for New York.

After lunch, we drove to the port of Tema to find our ship. 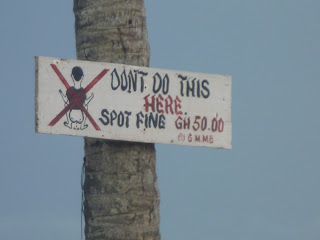 Posted by footloosemary at 5:21 AM