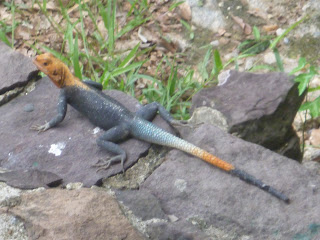 Our second day in Ghana I took a tour to Kakum National Park, one of the few remaining areas of tropical rainforest in the country.  There are supposed to be 40 large mammal and 400 bird species here, but I didn't see more than a few birds and a strangely colored lizard.  The main attraction here is the canopy walkway, constructed with boards, rope and pipe high in the treetops.  You put one foot in front of the other so you don't swing wildly side to side as you walk.  It gets kind of crazy when there are several people at once on the same section you are on.  I had been on something similar in the Peruvian Amazon, but there were a lot of birds and monkeys there.  Here I just saw trees.

We had lunch at Han's Cottage, a restaurant with a large crocodile pond in front of it.  We only saw the snouts coming up out of the water.

An interesting thing about Ghana is that you don't see anyone smoking.  Per our guide, smoking became unfashionable in the 1970's when there was a big campaign by the government, churches and schools to make it socially unacceptable for fathers and mothers to smoke in homes with children.  That was expanded to cars and workplaces.  Eventually the tobacco companies left and now you only see public smoking in bars.  This social pressure seems to work for HIV, also, since the rate is less than 3%, very low for Africa.

We reached our hotel for the night, Cocoanut Grove, around 3 p.m.  The place is right on a gorgeous rocky beach and has pretty lawns and cottages.  I was a little upset to find they have wifi here, since I don't have my laptop with me.  I haven't been able to send my blog since Capetown due to lack of internet.  My roommate is Susan again, who I shared with in India.  She arranged to have a massage before dinner.  The masseuse was a black American from New Jersey who had come to Ghana as a missionary ten years ago. 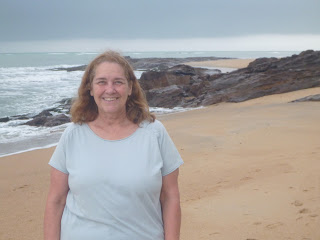 There was another group of 21 SAS faculty here on an independent tour so we had plenty of people to socialize with.  Beer was cheap and the buffet dinner  outdoors overlooking the ocean was upscale typical Ghanaian.  I was surprised not to see the sunset, but the Ghanaian coast faces South.
Posted by footloosemary at 5:01 AM