I went around the Cape Peninsula by car last year, and it was so lovely I decided it was worth doing again.  We were supposed to leave at 7 a.m., but that was a mixup with the tour company and the van wasn't scheduled to show up until 9.  We got them to come at 8.  There were three SAS professors, one student, me, three Chinese people who didn't speak any English, and a German scientist in Capetown for a conference on TB vaccine.  I didn't know there was such a thing, but he says it has been around since 1921 and only works on children.  There has been no new progress in 40 years, and adults still have to take four pills a day for six months.  They are looking to improve that, and Oxford has a clinical trial for a vaccine going on here in Capetown. 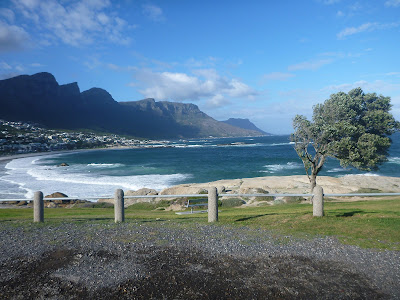 We drove through Capetown to Cliff's Bay and saw a lot of people out on the park along the coast walking their dogs, exercising, etc.  It looks very pleasant.  Formerly this area was reserved for whites.  Blacks caught there who were not servants would be transported to the inland black tribal area, even if they had been born in Capetown and lived there all their lives.  Even now you see very few blacks.  Two bedroom condos here cost about $300,000, so most couldn't afford to live around here.

We passed a huge township that looked full of poverty and despair.  Our guide said most of the residents have been moved to better housing, but foreign immigrants from Zimbabwe and Mozambique have moved in, creating a sinkhole of desperation since few have jobs or any way of making money.  Hence the nearby towns, mostly white, have very high crime rates.  A real downside to otherwise really nice neighborhoods by the beach.

We went to nearby Hout Bay, which looks like my idea of a New England fishing town on what must be one of the most beautiful bays in the world. We got on a small boat to go on a 45 minute cruise to Seal Island, located on one end of the bay.  The swells were so high i was seriously thinking of putting a life jacket on.  We feel so safe in our big ship, but a 30 foot boat is another matter!  We got right up to the rocky outcroppings to observe about 500 seals sleeping on the rocks or cavorting in the ocean.  They are so darn cute!

We drove across the peninsula to have lunch at a seaside, open air restaurant in Simons Town.  I expected to order the fish and chips, since that is a natural selection at a seaside restaurant.  I couldn't pass up the chance to have an ostrich burger though.  It was the same price as the beef and chicken burgers.  We passed an ostrich farm and stopped to greet the birds.  I probably ate one of their relatives.  After lunch, we went to nearby Boulders, a park with a walkway through a rock studded coastal area.  There are many penguins around.  They are black and white, but much smaller than the Antarctica penguins we are used to seeing pictures of.  Penguins and people were swimming in an area sheltered by large rocks. 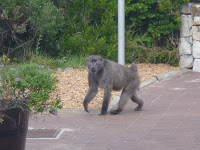 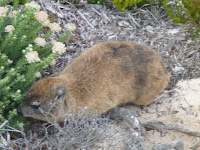 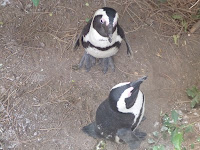 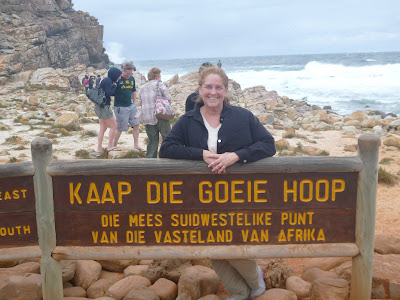 Next stop was Cape Peninsula State Park.  We passed the crosses commemorating explorers Bartolomeo Dias and Vasco da Gama before stopping near the lighthouse.  I had hiked partially up the trail to the lighthouse last year and it was not an appealing project after lunch.  Everyone else seemed to be feeling the same way, and most of us elected to hike DOWN to Cape Point, where the driver said he would pick us up.  He said it would take 45 minutes but I think we took much longer.  I thought it would be a regular trail, the way it started out, but we ended up scrambling up and down over bare rock and wooden slats.  There were no handrails and the wind gusts were strong enough to push you over the cliffs.  I wish I had had a walking stick because my balance was not the best and the wind did not help.   We finally made it down to the beach and the Cape of Good Hope sign, which designates furthest southwest point in Africa.  The southernmost point is actually further east.  For a long time this was considered the furthest south though, since it is where the ships turned from the Atlantic to the Indian Oceans.

We had planned to stop at a winery on the way home, but, alas, most everything was closed due to a holiday.  Mandela is back in the hospital, and I think the whole country would shut down for  a day of mourning if he died.  The blacks love him because of his sacrifices for the struggle against apartheid, and the whites revere him because when he took power he could have done anything, but elected to include everyone in the new South Africa.

Posted by footloosemary at 4:06 AM