Arriving in Capetown by sea is much more breathtaking than coming by air.  We rounded Cape Horn then came up the coast and around the peninsula and all of a sudden we were staring at Table Mountain.  It was just after dawn, and the sky was full of light and shadow.

We docked between downtown and Victoria and Albert mall, so it's a short walk to both.  We had a talk with embassy staff before we left the ship, and were warned that Capetown has one of the highest crime rates in the world.  The thieves here don't care if they are violent, so best to just hand everything over.  We were told to never walk alone, or girls in pairs.  One of the places they told us to avoid was Muisenberg, my old stomping grounds when I was a volunteer here last year.

My friend Sel from Chicago and I ignored their advice and walked to the mall in search of internet.  The food court had wifi, but we did not want to be at the open tables with our laptops, and noticed that nobody else was either.  We found free internet at McDonald's and the coffee shops, but only 50 minutes a day.  Finally we found a restaurant, Primi Wharf, with a wifi zone.  We each had a beer for $2.50 and stayed a couple of hours. 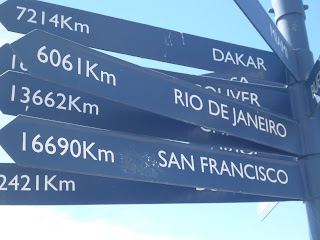 The ship paid $4500 so we could get a shuttle home from the mall after 4 p.m. daily, since they don't want us walking around the docks at night.  We waited about 15 minutes for a shuttle and finally got on an SAS tour bus that was dropping everyone off at the mall after the tour.  They offered to take us back to the ship and we gladly accepted.  I would hate to get mugged and lose my laptop.

The next day I went with Becky, the marketing professor from Florida, to the wine country.  We had our own car and guide, Aladdin, who picked us up at the ship and took us  pretty much wherever we wanted to go.  We left it mostly up to him.  We started at  Rust en Vrede winery in Stellenbosch, founded in 1694.  We sat out on a shaded patio overlooking a garden and sampled about five wines.  We were not rushed at all and just took our time and got to know each other a little better.  I bought a bottle of Cabernet, which may or may not make it back to the USA.

Next stop was Waterford winery, which reminded me of a Spanish hacienda with rows of rooms built around a central patio.  They gave us three wines, all paired with gourmet chocolate.

Lunch was at Reuben's in Franshoek, an old French Huguenot town.  He is supposedly the most famous black chef in Africa and has won "Top Chef" award.  I had Ostrich filet, which was very tender and good.  After lunch we went to a chocolate factory and had a demonstration and samples, after which I felt very overloaded with sugar.  We just took sips at the next winery, Bosenschal.  We got to pick five wines off a list and had a cheeseboard with it.  I did buy a wine glass in the gift shop.

Posted by footloosemary at 3:16 AM