Amy Biehl was a Fulbright scholar from Orange County, California, who came to South Africa in the early 1990's to make a difference.  It was the last gasp of Apartheid, and there were frequent killings of blacks and whites.  In August, 1993, Amy was driving some black girlfriends home in a township and was caught up in a mob, forced out of her car, and stabbed to death.  Her parents have since created a foundation in her honor that helps African children living in the townships. 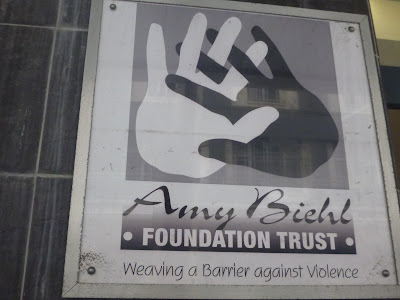 SAS has a tour with her name.  We started by taking a bus to town and going to the foundation headquarters.  We saw a couple of short movies about her life and work.  The four black men who were convicted of killing her served five years in prison then were released in the Truth and Reconciliation trials headed by Archbishop Desmond Tutu.  The men were forgiven by Amy's parents and two of them now work for the foundation.  We talked with one at headquarters and the other at an elementary school garden, where he is supervisor of the foundation garden projects in 18 township schools.  They didn't ask for money straight out but wanted us to buy things in their gift shop.  I bought a couple of remembrance bracelets but later lost them as they either fell or were "liberated" from my pocket.  I am not carrying a purse today since we are going to the townships. 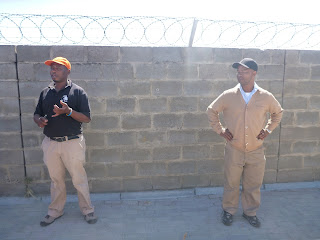 We drove around the Langa township, the oldest in Capetown.  It looks very well kept up, without the corrugated tin shacks I remember from Khayelitsa.  We then went to Gugulethu township, where Amy Biehl was killed, and visited an elementary school.  They showed us the garden and we talked with the "killer," who explained that he was a high school student at the time of the murder and "we all knew we were going to die by a bullet."   He said they all joined the struggle and there was no choice.  Feelings were high before the coming first national election in 1994.  Blacks were bombing shopping malls and whites were striking back and killing anyone black.  Now we have the "born free" generation, or adults coming of age born after the end of apartheid. 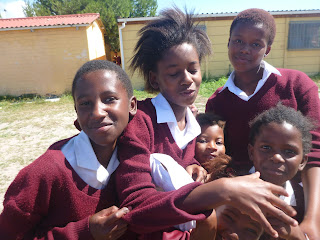 Amy's father, Peter Biehl (now deceased), supported the release of the killers, stating, "The most important vehicle of reconciliation is open and honest dialogue...we are here to reconcile a human life which was taken without an opportunity for dialogue. When we are finished with this process we must move forward with linked arms."

The foundation now supports after school programs, HIV/AIDS education, sports, creative arts, environmental education, music, and computer science.  They are teaching kids to swim who have never been to the ocean or a pool before.  The Youth Reading Role Model program has seventh graders read to first graders, which benefits both.

We had lunch at Mzoli's Meat, a township landmark popular with tourists.  It is outdoors but has a roof and plastic see through walls.  There are picnic tables with plastic red checked tablecloths.  We were given a meat platter with chicken wings,  lamb, and sausage.  Also an onion/tomato salad, beans, and cornmeal mush.  The barbecue sauce was really good.  There were other white tourists there, which seemed strange, since outside of there I only saw blacks. 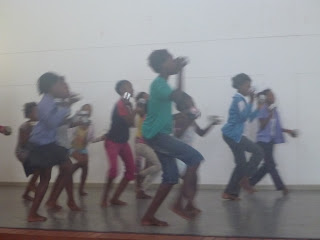 After lunch we went to Bongolethu Primary School to see one of the after school programs.   They didn't know we were coming, but did a creditable program for us.  First girls danced with tin cans, using them as percussion instruments.  Then they had a beautiful choir.  Then boys performed with trombones and clarinets.  You could tell the instruments were not the greatest but they had a lot of heart.  Lastly younger girls danced with sticks.  Each group seemed to have its own teacher.   We also talked to the instructor and kids in the youth soccer program outside.  They have a weed choked field and no demarcation lines or goalposts, but they are enthusiastic. 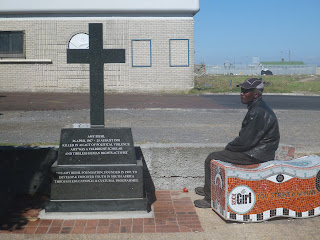 On the way back to the ship, we stopped at the gas station where Amy Biehl was murdered.  A memorial cross was set up in 2010.

You can actually ship donations to South Africa for free if you have any old clothes, school supplies, instruments, or whatever.  In the U.S. call 949 500 2110.  The website is www.amybiehl.org

Posted by footloosemary at 3:49 AM