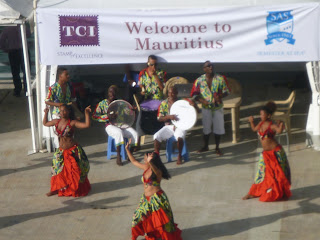 We arrived at sunny Mauritius, a former Dutch and French colony taken over by the British during the Napoleonic wars.  It seems in the middle of nowhere, and was an important air station and submarine base during WWII.  There is still a lot of sugar cane grown here, but most food must be imported so prices are high.  The major religions are Hindu, Catholicism and Muslim.  They are very multi-ethnic and proud of it.

They get about a million tourists a year, mostly from Europe, but are aiming for 4 million and trying to crack the Asian market.  The American ambassador came to talk with us and said our ship will make up about 1/10 of the Americans for the year.  I don't know if she realizes that 1/3 of the 650 students are not American.

Being so small and isolated, the air quality is about the best in the world.  There are gorgeous beaches and interesting mountains, with lots of tropical green.

I took a water taxi from the ship into town, about five minutes, for $2.   I didn't have an agenda, just walked around town looking in shops, etc.  There is a postal museum because the stamps are famous for their beauty, and for being the first issued in a British colony.


The other claim to fame here is that they manufacture a lot of designer clothing, like J Crew, so you can get the rejects cheap.

After Mauritius we had the Sea Olympics, all day of fun and games.  I participated in the relay race, which consisted of events all over the ship.  I slapped peanut butter on bread, which was then fed to our team's player.  Our ship is divided into seas based on residence, like Bering Sea, Red Sea, etc.  I am with Lifelong Learners, Faculty and Staff, and we called ourselves Luna Sea.  We were first place in the morning, but gave it up after losing the Stand up Comic and Karaoke events.  We did win at ping pong, helped by my Chinese professor, who is a national ping pong champion.  Second place in pull ups, pretty good for the old folks.
Posted by footloosemary at 10:25 AM