My remaining three days in Burma were spent in Yangon, the former British capital (then Rangoon) of Burma that sits on the Yangon River about an hour or so from where the ship is docked.  It has a population of about six million, but has few skyscrapers and lots of trees, making it seem more provincial than international.  The downtown has wide, paved streets and old British style buildings.  We walked from the Strand Hotel, the oldest in town at 110 years, past the post office, city hall, Sule Pagoda, and Independence Monument.  There was a small market selling lots of betel leaf.  The leaf is wrapped around a mix of betel nut, lime paste, and tobacco and chewed.  It causes oral cancer, loose teeth, and red mouths but is still popular with some.

We went on to Kandawgyi Park. a beautiful lake that holds the Royal Barge, now a floating restaurant.  Next we went to see the reclining buddha statue, not as large as the one I saw yesterday but a much prettier face.  He was built in 1901 of brick and cement.  After a good Burmese lunch at Padonmar Restaurant, we checked into our hotel.  I have my own room, which overlooks the lake.  There is wifi in the rooms, a real luxury after going without for a few weeks.

We got to relax a little before heading out to the 2200 year old Shwedagon Pagoda, a magnificent complex in a beautiful park.  It was founded by two brothers who were apparently given four hairs by Buddha, which are enshrined in the Pagoda.  We spent an hour walking around the 450 foot tall Pagoda.  I met an OAT tour and talked with them about their journey.  Some of them were very interested in going on Semester at Sea.  My burnt feet are much better today.  At the end we got to light a whole section of lamps in front of the Pagoda, which is lit up beautifully at night.  Dinner was at Le Plana, an outdoor French restaurant on the grounds of an old mansion.  It was new agey, with minimal food and maximal presentation.  We had a shrimp appetizer, pork, plus ice cream for dessert.  I have no idea what it costs, but the cars in the parking lot were very luxe and the people well dressed.  I felt very plebeian coming in a tour bus and wearing a T shirt. 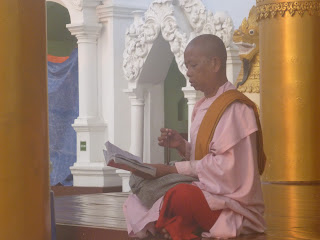 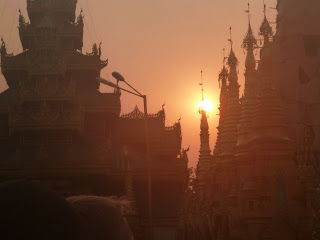 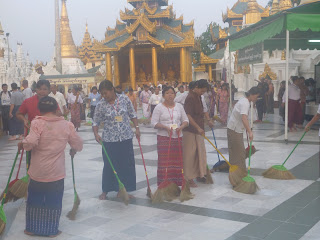 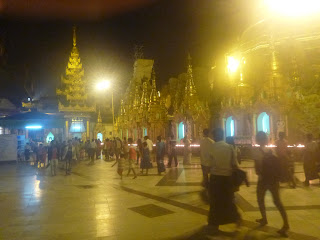 The next morning we stopped at a nunnery and saw all the little girls in their pink outfits gathered to say goodbye to a schoolmate who was leaving.  The buddhists apparently educate the girls, as well, but separately.  We then went to the Kaleywa monastery.  This is a more advanced school and has girls as well, but mostly boys.  It has over 1000 students, who study math, science, reading and writing, as well as religion.  They rise at 5 or 6 a.m. to chant and study, then go to pursue, usually at a prearranged place so the same people are not giving food all the time.  It is part of the religion to give food to the monks.  They can't eat solid food after noon.  The rest of the day they read, sleep and chant.  After 5 or 6 years they decide if they want to remain a monk or go out into the world.  There are 500,000 monks and about 60,000 nuns in Burma.

We went in a large room with some of the junior monks and nuns and they told us about their life.  We sang and danced for them (macarena and hokey pokey, which seem to be the standards everyone knows) and they sang for us.  Then we went to visit a classroom.  The rooms are huge, so I am surprised those in the back can see the small blackboard or hear the lesson.  They were taking a physics exam, but we went around and gave all the students gifts of workbooks and pens.  It must have been quite distracting while they were working problems with pencils and protractors.  They just moved the gifts and went on with the tests.  One of our students took a step backward and accidentally fell through a hole in the wooden floor.  His knee was lodged in and they had to pry out another floorboard to get him out.  I did first aid to the big scratches on both sides of his knee. 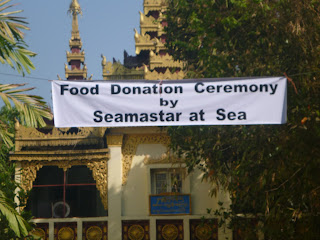 Next the students lined up in two seemingly endless lines.  We got in groups of two to man the different food stations.  On each side there was one for rice, next a cooked vegetable mixture, then a kind of cole slaw, then fruit.  The native ladies dished up small bowls, which we then dumped into the larger containers the students carried down the lines.  It took about an hour to dish everything up.
We then got to sit down for our own lunch.

In the afternoon we went to a meditation center.  The people either sit or walk VERY slowly around the room to meditate.  A buddhist meditation master met with us and explained meditation.

We walked around Chinatown before going to dinner at the Sky Bistro on the 22nd floor of the Sokum tower, one of the tallest buildings in the city.  The views were incredible.

Posted by footloosemary at 1:32 PM