Two days sailing brought us to Singapore.  It is a very modern city with standard of living and average income above the US.  It has no resources of its own but has been able to succeed because of its location (the busiest port in the world) and its emphasis on education and technological innovation.  It is a major oil refiner and high tech manufacturer.  The cost of living is high.  A 500 square foot apartment can cost $2,000 a month.  A VW Passat costs $150,000, in part because of 100% tax and an $80,000 permit to get a car.  Quite the encouragement to use public transportation.

Military service is compulsory for males at age 18.  If they fail the physical tests they go in three months early to get in shape.  Then they serve 11 years in the reserve with two weeks to a month commitment each year.  The government feels this fosters discipline, teamwork, and leadership.  Girls can volunteer, but usually they just come out two years ahead of the guys at university or in the job market.

Singapore was a British colony from 1819 to 1959.  It became part of Malaysia but gained independence  in 1965.  In the 1960's the country was labor intensive, in the 70's emphasis was put on upgrading skills, in the 80's on bringing in capital, in the 90's on technology, and at present on knowledge and innovation.  It seems to perfectly fit Thomas Friedman's model of what the US needs to do, but is much further along.  The country has no debt.

The government consists of one party and has "guided" democracy.  There are four official languages: English, Malay, Chinese, and Tamil.  Racial agitation is not tolerated.  Jehovah's Witnesses and Falun Gong are not welcome.  They have fines, jail time and caning for anti-social behavior like smoking, spitting, littering, and jaywalking.  It is illegal to bring in chewing gum.  Drug offenses mean the death penalty.  The upside of this is that it is a very clean and safe country.  We will see if our kids manage to leave here with no major incidents.  SAS kids in the past have been jailed and caned.  I think alcohol was involved.

Today my Biology class had a field trip to One North, so named because Singapore is one degree north of the Equator.  This is a huge research and development complex with biomedical and science and technology arms.  It also includes universities, a media wing, residences, and a huge park.  The government offers $1 billion per year of funding, and most of the major drug and biotech companies have stakes here.  They partner with major universities worldwide.  They have funded about 10,000 students for PhD's at local and foreign universities.

We started at Fusionopolis, which does technological research.  It felt like walking into a space ship.  We saw some of the things they are working on.  They try to translate the research into useful things and spin off commercially viable research into separate companies.  One of the spin off companies makes eyeglasses out of recycled material, another video games for brain injured people to retrain their brains, another hospital beds that alarm when a patient is not breathing normally or need to turn over. 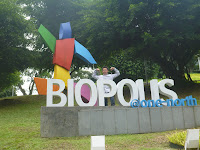 We next went to nearby Biopolis, which fosters deep integration of computational biology, biotechnology, biology, and genetics.  They were set up in 2000.  When the SARS scare happened in 2003, they were the first to sequence the first three cases, then compared them to subsequent cases to get the trajectory of the disease before working with Roche to develop a diagnostic test, all within two weeks.    They work on genetic and stem cell projects to personalize treatments to make them faster and more effective.  I could go on and on, but will just say what they are doing here is huge.

Posted by footloosemary at 10:50 AM