Getting from Hong Kong to Ho Chi Minh City (the locals still call it Saigon) involved three days and then several more hours sailing up the Mekong Delta.  The skyline of Saigon probably looks similar to what it did in the 60's; nothing like Shanghai, where they seem to put up a new skyscraper every week.  Of course, we did such damage to the country that a lot had to be rebuilt before they could think about skyscrapers.

They obviously had a severe inflation problem, since one US dollar equals 21,000 Vietnamese dong.  It makes you feel like a millionaire until you actually try to buy something.  When I got 10,000 in change I felt pretty good, until I realized it was only about 50 cents.  They do not even have coins.

We are here during the Vietnamese New Year celebrations (Tet).  This is good in that there is much less death defying traffic, but bad in that many places are closed.  They use a lot of flowers to decorate for New Year's, so the city looks very festive.  It is like seeing Rose Parade floats all over.


I took an all day tour of Saigon.  We went to the History Museum and got an overview of Vietnamese history.  Hanoi is 1000 years old and Saigon is only 300 years old.  We learned that the Vietnamese have always been good at guerrilla warfare and were able to repel the Mongols three times.  They were taken over by the Chinese for 1000 years, so many of the artifacts seem Chinese in style.

The History Museum also had a water puppet show, supposedly put on the way it would have been done in the 12th century.  The front pool is filled with water and the puppeteers behind the curtain manipulate the puppets with long rods.  This was not as good as the water puppet show I saw about ten years ago in Hanoi, where the puppeteers wore black suits and actually got under the water and swam around with the puppets, but was still entertaining.

The Reunification Palace was built by the French but rebuilt after being bombed in 1962.  The French controlled Vietnam from 1858 until the Japanese took over in 1940.  The latter are not well liked since they exploited the Vietnamese and 2 million people died, mostly of famine.  The British liberated the Vietnamese but the French stepped in and reclaimed Indochina until being defeated in 1954.   The subsequent Geneva Accords declared Vietnam independent and forbade interference by third powers.  UN monitored free elections were supposed to be held in 1954 but the US stepped in and halted them because the Cold War was going on and they were afraid the country would become Communist (Wikipedia says the Soviets halted the elections.).  Thus the whole region would become Communist according to the domino theory.  Ho Chi Minh, a popular leader in both North and South Vietnam,  admired the US Constitution and reached out to America but got no response because of the fear of communism running rampant in the US at the time.  The US supported President Diem in the South, a Catholic who apparently persecuted people of other faiths, particularly Buddhists.  After ten years he was assassinated and the US propped up some other dictators until the government in the south fell in 1975.  Of course the tale is very slanted toward the Vietnamese viewpoint, but they don't overplay the American aggression the way they could.  The statistics range from 3 to 4 million Vietnamese killed in the war, and about 58,000 Americans.  This is terrible whichever side you are on, but we were destroying their people and their country, not the other way around.  Those millions of dollars and thousands of young men could have been put to better use.


We then went to the Notre Dame Cathedral, a stone edifice built by the French in 1880 and looking like it belongs in a city in Europe.  This was closed, but we went across the street to the Post Office, also colonial French and looking like an ornate train station.  They have the names of famous inventors along the front and include Benjamin Franklin, a former American ambassador to France who was apparently quite a favorite there, especially with the ladies.


Our next stop was the Cao Dai temple, built in  Chinese-Vietnamese style with a variety of other architectural influences. The nave has columns decorated with dragons and many statues.  The colors are unusual, with a lot of turquoise, pink and yellow.   Above the altar hangs a giant sphere containing the divine eye of Cao Dai with an eternal flame. Cao Dai's religious philosophy is a blend of Asian religions (Buddhism, Taoism and Confucianism) mixed with Christianity, Hinduism and Islam, as well as animism and Theosophy.  It originated in Vietnam but is practiced in many other countries, including the USA.  A service was going on, with all of the participants dressed in white from head to toe.


We stopped for lunch at Dong Khanh Restaurant in Chinatown.  This was supposed to be a typical Vietnamese lunch but seemed Chinese to me.  I tried the local beer, "333," which was quite good.

After lunch, we stopped at Cha Tam Catholic church, where President Diem sought refuge and prayed right before he was assassinated in 1963.  Our President Kennedy had been withdrawing from Vietnam but was also assassinated around the same time and American intervention escalated.  I sat in the same pew that he had and said a prayer for all the dead soldiers on both sides. 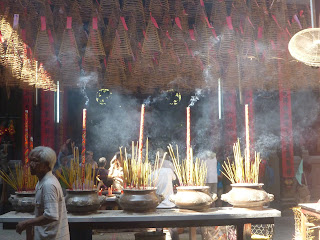 Our next stop was the Thien Hau Temple, the oldest Chinese-built pagoda in the city, dedicated to the goddess of the seas and protector of fishermen and sailors.  After that we walked to the Quan Am Pagoda, a Chinese-style Buddhist temple featuring beautiful courtyard, gardens, a pond and a Jade Emperor.  Incense was intense at both temples. 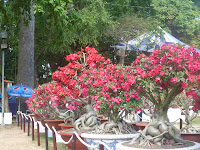 Our final stop was the Central Park, where it was the
final day of the Flower Fair, a Tet tradition.  They had kiddie rides, a lot of bonsai, and flowers everywhere.  They played "Gangnam Style" on the loudspeaker and I watched the little Vietnamese kids do their best Psy imitations.  The best and worst of international culture pervades the planet.

Posted by footloosemary at 4:06 AM