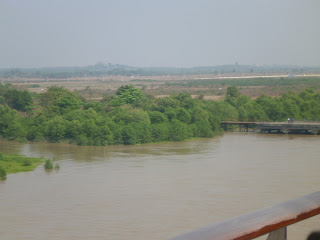 We had a smooth sail from Singapore through the Straits of Malacca to the Andaman Sea, then up the Irawaddy River Delta to Yangon (formerly Rangoon), the capital of Myanmar (formerly Burma).  On the way to Burma we had a memorial service for the professor who died in Shanghai.  This consisted of the ship doing an infinity pattern on the ocean and the passengers and crew throwing out red roses into the wake.  Quite remarkable, but hopefully not something I will do again.

Burma just recently opened to American tourists.  The former socialist government wanted to wipe out traces of colonization so changed the names back to pre-British ones, but the people still use the old names.   They even changed the road right of way from left to right in the 60's.  Even today most of the cars on the road have right hand drive, so the driver is on the same side as the curb.

This country was a British colony for 100 years until the Japanese took over in WWII.  They achieved independence under General Aung Son, but he and his cabinet were assassinated soon after.
The military took over and ruled with an iron hand for 40 years, during which the economy was mainly driven by nepotism and cronies of the military.  They kept Aung Son Soo Ki, the daughter of the late general, under house arrest for 20 years, during which she was awarded the Nobel Peace Prize.  She missed seeing her daughters grow up and her husband pass away in England while she remained in Burma.  During this time the world, with the exception of China, pretty much boycotted Burma due to human rights issues.  The government finally allowed elections for 55 seats out of 600 in the parliament in 2011, and 50 of those went to Aung Son Soo Ki's National League for Democracy.  The next elections will be in 2015, and hopefully the country will go further into democracy if the military does not crack down on it. 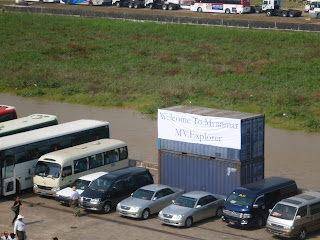 The government is now considered a semi-democracy.  Barack Obama and Hillary Clinton have visited in the past year, and the US Chamber of Commerce is here this week.  Four Burmese banks have just been approved for financial dealings with US banks, so money should start flowing.  Most of the major hotels here used to be owned by cronies, but there are now very nice hotels run by foreign companies.  They had one million tourists last year and expect nine million in 2020.  There is a lot of discussion on how to grow responsible tourism without damaging the beauty and cultural heritage of the country.  They don't want a lot of cheap "backpacker" type hotels and become like Thailand, so licenses to accommodate foreigners are controlled.

We were supposed to dock at 8 a.m., but they delayed us till 4 p.m. so they could dredge the river.  It seems very shallow as we were sure churning up a lot of mud on the way in.  There is no way they could take in large cruise ships.  We did not clear customs till about 6 p.m., so I will start my adventure in Burma tomorrow.

Posted by footloosemary at 8:36 PM