On May 8 we reached Punta Delgada on Sao Miguel, the largest and most populated island of the Azores.  All of the nine islands are volcanic in origin, and there are many craters and geothermal features. It is part of the mid Atlantic ridge, the world's longest submarine mountain range, formed 250 million years ago. The first recorded sighting was by the Portuguese in 1427.  It remains a territory of Portugal, 900 miles away. 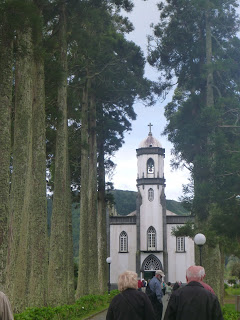 I took a trip to Sete Cidades, named after the seven kingdoms of Atlantis, which the Azores are supposedly the remains of.  The village is on the shores of two crater lakes divided by a bridge.  One has famously blue water and the other green, but the color difference is because of the algae on the green side.  The day was overcast, so they looked much the same to me.  The village was small but modern, and seemed a different world from villages in Africa.  We stopped at a picturesque church.

On returning to Punta Delgada, we went to a tasting of local wine and cheese  in the harbor area.  I enjoyed both.  After going back to the ship for lunch, I walked around the town.  It was frustrating not to be able to get internet to work at the shopping mall.  By this time it had started to rain pretty heavily.  We were lucky to be in town at the time of their major festival, Senhor Santo Cristo dos Milagres, but the rain put a damper on the many lights and flowers that make the festival famous.

One of our engines is not working, so we stayed in town several hours past scheduled time for the part to be flown in, along with the technician to do the repairs.  The engine was eventually fixed, but one of the stabilizers was out, so we were unable to get off the ship in Horta, our scheduled port the next day, because the ocean was too rough for the tenders without having the stabilizer.  I did get pictures of Horta, on Faial Island, and nearby Pico Island as we sailed away.
Posted by footloosemary at 5:48 PM