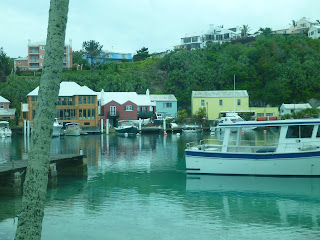 We were scheduled to get into Bermuda today at 8 a.m., but since we missed out on Horta, the captain decided to get there faster.  We docked in Hamilton, the capital, and were able to get off the ship about 4 p.m. yesterday.  We were conveniently docked downtown and had many shops right across the street.  My main interest yesterday was to get wifi, which I found in the library., about three blocks away.  I was able to answer some emails, a lot about my upcoming move back into my home after two years away.  I was finally able to arrange to turn the water on in the house, so I can get it cleaned and ready for the movers before I get there.  It was cleaned after the last renters moved out, but has been empty since August, and I would rather someone else deal with the resident critters and dust that have probably accumulated in the past nine months.

Bermuda consists of 138 islands with a total area of 27.7 square miles.  It is a British territory with a Governor appointed by the Queen.  It was  discovered in 1509 by Spain, but they were preoccupied with their rich settlements in America and did not settle in Bermuda. 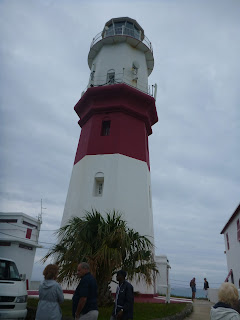 In 1609, an English ship carrying colonists and supplies to the new settlement in Jamestown, Virginia, wrecked in Bermuda.  The wreck supposedly inspired Shakespeare's play, The Tempest.  Everyone survived the wreck and they built two new ships from salvage and native cedar before heading on to Jamestown.  The Virginia colony was starving, so they headed back to Bermuda to get some of the abundant food they had found there.  In the meantime the captain died, and his nephew decided to go on to England instead of returning to Jamestown, which floundered without the promised supplies.  The captain's body was taken to England for burial, but his heart literally remains in Bermuda.

Bermuda was permanently settled by the English in 1612 as a way station for ships going to and from the colonies.  It became more important after American independence.  During WWII the British traded a 99 year lease on two military bases for 50 American destroyers.  At one point the US had thousands of soldiers here, but the leases were given up 15 years ago  when the US was going through a rash of base closures.  An international airport, schools, and churches were built on the site.  The barracks now provide housing for low income Bermudians.

St George was the first capital and is now a UNESCO World Heritage Site.   A prominent feature is King's Square, named after George III, which has replicas of stocks, pillories and a dunking stool.  We watched a reenactment of a woman being dunked in the adjacent harbor for "nagging and gossiping."  We also visited St Peter's Church, the oldest Anglican church in continuous use outside of the British Isles. which was built in 1612 and rebuilt in 1715 after a hurricane.   A lot of the graves and plaques in the graveyard are for early settlers who died from epidemics.  There was a separate graveyard for slaves.

Nearby is Fort St Catherine, built in 1614 by Bermuda's first governor and now a museum.  It overlooks the site where the Jamestown settlers became shipwrecked in 1609.  The stone ramparts have lots of old cannons looking out to the ocean.

The beautiful Botanical Gardens opened in 1898 and cover 36 acres.  Besides ornamental horticulture, there is agricultural research and an art museum.


Tourism is the main industry.  We saw three other cruise ships while we were there, and they were expecting a "megaship" of 5,000 passengers the day we left.  Offshore businesses are the second main source of income, although with new rules it is not the tax haven it used to be.  They have 7,000 foreign workers.  Our guide pointed out homes of Ross Perot and Michael Bloomberg.

They have good roads, but owning cars is discouraged with a 75 to 150% tax and $8/gallon gasoline.  Public transportation is well developed with ferries and buses.  The international airport has about seven different airlines using it.

Bermuda has no rivers or freshwater lakes.  Drinking water is collected on the roofs of buildings and stored in underground tanks for each home or property.  You see endless white roofs made of lightweight coral limestone.  These are washed periodically with a mixture of lime and chlorine, which purifies the water before it runs into the tank.  There are also some desalinization plants, but the water from these is very expensive.  They do have hurricanes here, and the houses are built to sustain 170 mph winds.

The Bermuda triangle, with apexes in Bermuda, Miami, and San Juan, Puerto Rico is said to be responsible for mysterious shipwrecks and plane crashes.  Other well known terms are Bermuda grass, Bermuda shorts, and Bermuda onions.
Posted by footloosemary at 7:19 PM