I left Santa Monica and drove to San Diego, where I stayed for two nights at the Hilton Bayfront Hotel.  It was fun to walk around the Gaslamp district and take the ferry to Coronado.  I walked around with Phyllis from Boulder, Colorado, who is my roommate at the hotel.  We visited the Hotel del Coronado, where Prince Edward met Wallis Simpson for the first time. 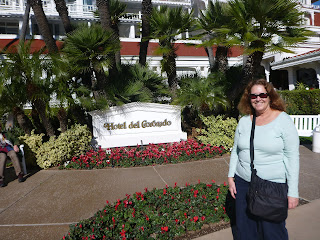 We left Ensenada on January 9.  We have about 650 students and 57 faculty from 120 universities and 60 countries.  Quite a mix.  I am categorized as a Life Long Learner, people over 40 that get to enjoy the cruise and classes without having to do the assignments or take tests.  There are at least 32 of us.  The ship is fairly new and I am told the fastest ship on the sea.  I took a tour of the bridge and it looks like our max speed is 40 knots, though we seem to be going 15-20.  Our ship, the MV Explorer, started life as a Greek cruise ship but was bought in bankruptcy.


We had our first casualty, in that one of the kids did not make it onto the ship since he was too drunk to get on in Ensenada, even after the 1 1/2 hour bus ride from San Diego.  The dean tells the kids to "make intelligent choices,"  and there seems to be an "or else" tacked onto that.

We got to Hilo after about five days and are here for two days, leaving tonight.  I have been to the Big Island twice before, so stayed locally instead of taking a trip to the Volcano National Park or Kona on the other side of the island.  I walked to downtown Hilo, two miles away from the port.  This was a real pleasure since there is not a great place to walk on the ship since no deck goes all the way around and it is hard to walk when there are ten foot waves rocking the boat.  I visited the Tsunami museum, which talks about the multiple tsunamis that have hit the islands.  Hilo has been devastated many times.  The tsunamis have come from earthquakes in Alaska, the Aleutian Islands, Chile, and Japan and can hit even the coasts that do not face where the earthquake is.  I like it here, but I think I would want to live on a hill. 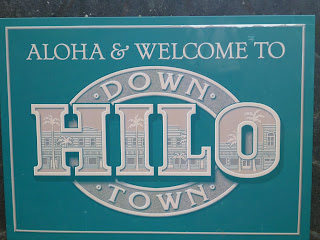 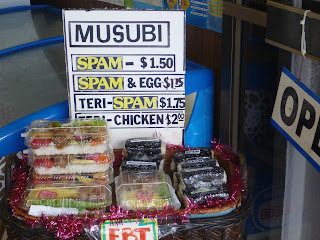 I took Bonine the first couple of days and did not get seasick.  It said it was a non drowsy formula but I felt like I could sleep the clock round.  We usually have programs in the evening but I missed a lot of them since I was going to bed at 8 p.m.  I was signed up for three classes but dropped the 8 a.m. one so I stay awake at night and sleep later.  Thankfully, my sleep problem has improved markedly since I stopped taking the medicine.  I am waking up at 6 a.m. and going to the gym, which is probably better for me anyway.

Archbishop Desmond Tutu is sharing the voyage with us until Capetown.  He is a short, round man who seems to be perpetually smiling.  He asks that we call him "Arch."

Hilo update:  About 200 of the kids went to a hotel party and got so rowdy the police were called.  30 fake ID's collected.  The manager did not press charges or some of the kids would undoubtedly be in jail and miss the ship when it sailed.  Hearings will be held by the Dean, and a lot of kids will not be let off the ship at the next port.  I guess this is a good way to start, because it scared the hell out of the kids, thinking that they might be put off the ship when we have barely started.  I think the drunken parties will be a thing of the past.

Off to Yokohama tonight.
Posted by footloosemary at 8:11 PM