After visiting Hiroshima, our tour group took a bus and ferry to Miyajima Island, called one of the three most scenic spots in Japan.  The Itsukushima Shinto Shrine here is a World Heritage Site.  It was first built in 593 and remodeled in 1168.  It consists of many halls connected by long covered walkways, some over water.  Bright red lacquer is used throughout to protect from erosion.  The striking red O-Torii Gate stands in the water in front as if arising from the sea.

Other temples and pagodas abound on the island.  There is a wide seaside walkway along the shore.  Wild deer wander about, seemingly unconcerned.  It is incredibly scenic and peaceful.  I would definitely come back here for a peaceful vacation.

We stayed overnight at Hotel Miya Rikyu, a traditional Japanese ryokan, or inn on the waterfront.  I shared a room with three other lifelong learners.  There were bamboo mats on the floor and a large low table, which was pushed aside at night to make room for our four futons, which were rolled up in the closet during the day.  We had separate toilet, bath, and sink rooms.  There were two Danish style chairs by the window, so we didn't have to sit on the floor all the time.  The shoji screens along the far wall opened to a window wall overlooking the lake.

When we got to our rooms, we were told to put on the traditional robes found there.  These consisted of a long robe covered by a knee length robe in a complementary fabric and finished off with a colorful sash.  We then went to the banquet room and were served a traditional Japanese banquet.  There were many courses, mostly fish, including at least four different oyster dishes, which is the specialty of the region.  They didn't light the fire under the rice till about half hour into the meal.  I was sick and wanted mainly rice and soup.  Soup comes right before the dessert here, so I had to wait about an hour to get to the rice and soup part.  I couldn't eat most of the rest, since I don't do oysters or sushi and we were told not to eat blowfish for health reasons.  It was beautifully served, though.

After dinner, some of the girls ventured into the community bath.  It was really quite fancy, with individual stations to clean off, wash hair, etc first.  Only one of the life long learners went up, and she said it was amazing to see all the beautiful ,young, nubile bodies in our group.  They range from Gap year to college seniors, and I have to agree many of them are stunning.  There was a separate bath for the men, so I didn't get a report on them.  They wore the same robes we did to dinner, though.

The next day we had several hours to walk around the shrines, shops, etc. before boarding a ferry and eventually the bus and bullet train to return to Kobe. 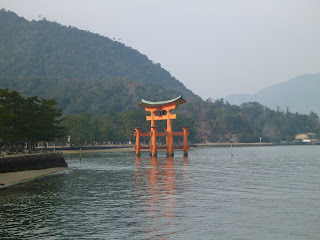 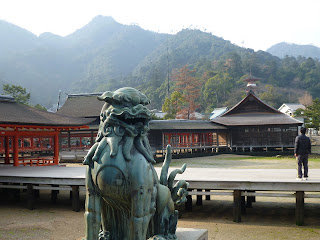 Japan followup:  Over the five days, Semester at Sea students, faculty, and life long learners had six people "roofied," 11 robberies, two assaults, eight credit card frauds over $1000, two ATM robberies, and nine health issues.  Japan was supposed to be fairly safe, so we will see if the people get smarter and more careful as we go along.
Posted by footloosemary at 10:41 PM