We had a "field trip" to the Panama Canal one Saturday.  I went a little early to go to the Albrook Mall near our meeting place at the bus station.  This is one of the biggest malls I have ever seen.  It has five food courts.  The other volunteers  met me at the bus station on time but had not eaten, so by the time they ate and we were waiting for the next bus in the sun for awhile, two more hours had passed.  I was feeling a little dizzy so opted out of the Panama Canal viewing.  It would be a shame to be here for three weeks and never see it, though.

We had a second field trip to the Parque Natural Metropolitano just north of the City.  It is over 650 acres of jungle like terrain, with multiple trails going through the jungle and up to viewpoints.  I could not make it up the steep one because of continued weakness in my knee so I went off my myself.  It was a little creepy walking through that jungle alone, and hearing things crashing through the bush.  I didn't see any animals, but we had seen sloths and guinea pigs nearby.  There were lots of turtles in the pond.  I entertained myself by throwing bits of carrot cake into the pond and watching about a hundred turtles dash for the crumbs.  This huge park is called "the lungs of Panama City" and was formerly part of the US Army base and used for jungle exercises.  It is partnered with the Cleveland Municipal Park system, another canal city (Erie). 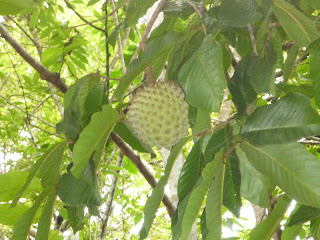 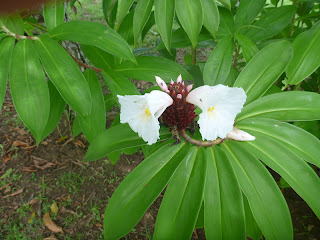 I took a day off from school the last week and walked to Casco Antiguo.  It was extremely hot walking along the jogging trail.  I had my water bottle with me but had forgotten to fill it.  I was feeling terrible.  I stopped by some stores but they were closed.  So I trudged on to the Panama Canal Museum.  I bought my ticket after they said they had water on the second floor.  I trudged up the steps, feeling like I was going to faint any minute.  My mistake was that I was only on the first floor, since Panama is like Europe in counting the ground floor as "zero."  I was able to go into the bathroom and wash my face, which was beet red,  in cold water.  I then took an elevator up to the real second floor.  I expected a restaurant selling bottled water, but there was only a 5 gallon water cooler.  I filled my 1/2 liter water bottle up 3 times and drank it all while sitting on a bench reading my kindle.  I sat there for about half an hour till finally getting up and looking around the museum. 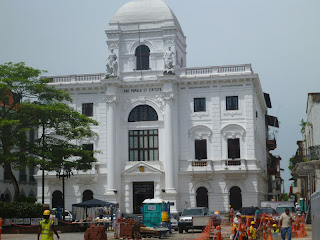 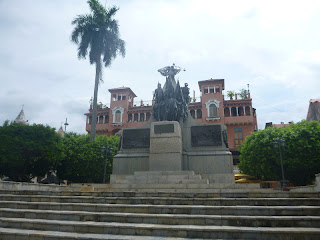 The second (third?) floor of the museum was mostly about the US presence in Panama.  The exhibits were all in Spanish.  I had rented the English tape but there was hardly anything on it compared to what was in the exhibits.  A lot of the signs were (justifiably?) very detrimental to the US.  When we signed the contract to build the canal in 1903 there were clauses in it about being able to protect our interests there.  We apparently took that and ran with it.  The plus side was that so many of the workers were dying of malaria that the US Canal administration pretty much wiped out malaria in the country.  The engineers did an amazing job finishing the canal that was started by the French years before.  During that time, they brought in telephones, underwater cables, radio, electricity, and many more technological advancements.  The canal brought a lot of commerce to the country.  On the minus side, we pretty much took over the country in the name of "protecting our interests."  When the Panamanians complained, they were given a little more money. and we built more bases.  By WWII we had forts in every province and Panamanians did not have free access to the Canal Zone. There were demonstrations in the 1960's when students were not allowed to raise the national flag in schools, resulting in many deaths and injuries when the US retaliated.  Finally, the US relinquished the canal to the Panamanians in 1999.

After the museum, I went to visit the National Theater, built in 1905.  It has many tiers of balconies and reminded me of the Ballet Folklorico theater in Mexico City. It, and a lot of the buildings in this area, are in the French style with a lot of wrought iron balconies, gates, etc.   I had lunch at the outdoor restaurant Casa Blanca at Plaza Bolivar.  Just as I finished, it started to rain.  Soon it was pouring, and I grabbed a bus to Metrocenter before walking the rest of the way to the hostel.  Luckily, I was carrying my umbrella.  I still got soaking wet in the heavy rain, a marked juxtaposition from nearly getting heat stroke earlier in the day.

We had a farewell dinner Friday night.  Kari had picked a restaurant in another section of town.  Due to rain, we were unable to get taxis, so ended up eating at the local sushi restaurant without her.


Posted by footloosemary at 9:10 PM