I arrived in David on June 30, after a brief stop at the National Hotel in Santiago for a lunch meeting with one of the WorldTeach sponsors.  There I met Drew, Katie, and Jennifer, who are volunteering for a year, as opposed to the rest of us, who are here for only six months.


Kari, the WorldTeach country director, had arranged for me to stay with the Guerra family in David for $110 a month, not including food.  AbeI is a teacher who commutes to Bocas del Toro and Kattie is an NICU nurse from Bolivia.  I had my own bedroom and a fan, but we all shared the one bathroom and small kitchen.  The window in my room looks out into the hallway.  There was a park near their complex, but they told me it was dangerous to go there.  I later learned that the whole neighborhood is considered one of the worst in the city.  To get to school, I had to walk a few blocks, take a shared taxi to town (50 cents), walk two more blocks, then take a bus (35 cents) before walking six more blocks to the university.  Since some of my classes are at night, I was not too happy about this.  The couple also had a four month old baby, who was basically good but did have a few crying spells.  They spoke no English.  I paid $110 a week for the room but that did not include food.


When I called the University, the director of the language department did not know I was coming.  She had apparently been on medical leave when this was arranged, so the only people who knew about it were the director in Panama City and the secretary in David, who had forgot to tell her boss about it when she came back from leave.

I went to work on Tuesday.  The director was appalled at where I was living and had a new place for me by the next day.  For $150 I have my own room, bath and three meals a day.  This is paid for by the university, plus they give me $200 a month stipend.  I had to pay the first week at the first place out of my own pocket, since it is apparently in the contract with WorldTeach that the university provides the housing.  I gave the Guerra family $50 since I only gave one day notice I was leaving.

I now live with the Lara family.  Juan works for a government agricultural agency and will retire in December.  Mery is 63 and retired.  Women retire here at 57 and men at 63, which goes against all kinds of equal opportunity laws in the US.  They have two adult sons and one daughter, all married with their own homes in David.  The boys are twins.  One has two young children and the other a baby on the way.  The daughter lives recently graduated from University in Panama City and lives there with her husband.

I rarely see Juan, although we did all go up to his finca (ranch) one Sunday to see his cows.  He has someone watching the place full time but usually goes up there every weekend.  It is beautiful, with a river on one border and  unobstructed views of the mountains.  I see Mery a lot, since she serves me all my meals and won't let me do the dishes.  She goes to the Lion's Club four days a week for an exercise class.  I only have one day I can go with her due to my schedule.  It is free and has about 20 local women and a young male instructor.  We did a lot of bouncing balls, floor exercises, and hand weights.  Mery also goes to bingo for five hours every Saturday afternoon, but I have not tried that yet.  I think I would just fall asleep after being in class five hours that morning.

It is only about a mile walk to the university, which is nice in the morning but can be very hot or raining in the afternoon.  I try to carry an umbrella with me all the time, for the heat and the rain.  This is the kind of rain that can soak you even if you have an umbrella.  There is often a lot of thunder and lightning, as well.  Hurricanes tend to be on the Caribbean coast, however, so I feel safer here on the Pacific, although we are about an hour from the beach and there is apparently no bus that goes there.

I co-teach high school students from 8:30 to 11:30 Monday through Thursday, adults Tuesday and Thursday evenings from 6 to 9 p.m. and 8:30 to 1p.m on Saturdays.  My office hours are 3 to 6 on Wednesday.  So my days off are Friday and Sunday.  The kids and adult weekday and Saturday schedules are all on different vacation schedules, so I always have to be here at least part of the week. 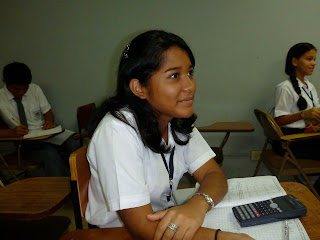 My grand plans to see some of Panama and Costa Rica on my vacation time are out the window.  The good thing is that it is only an hour bus ride to Boquete up in the mountains, so I can go there overnight and enjoy weather about 10 degrees cooler than in David.  It is too hot or wet to walk much in David, so that is where I go to get in some long walks in beautiful mountain scenery.  The area is known for growing coffee and flowers.  Also, there are many American retirees there and I have seen almost no foreigners in David.

There are two malls in David, but both are outdoors so you can't go hang out in the air conditioning unless you are in a store.  Neither mall has much of interest.  There is a PriceSmart (like Costco) and a DoIt Center (like Home Depot), plus another store like Kohl's.  Other than that there are shoe stores and expensive clothing stores with only small sizes.  I really don't need to buy anything, since all my food is provided.  Only one mall has a food court, and it is small.  There is a Pizza Hut and McDonald's near one of the malls.  There is a Java Juice, Dairy Queen and McDonald's a few blocks from where I am living now.  Also a Curves, which I am considering since it is hard to get in all the walking I usually do due to weather issues.

I went to the dentist here to get a cleaning, since I had not had one in over a year.  I didn't find any dental hygienists in Africa and I couldn't get an appointment in the short time I was in the USA.  I paid $25 for an ultrasonic cleaning and flouride application.  I haven't had one of those in years since it is in our water supply in the US.

I also went to a dermatologist for a rash on my neck I have had since coming to Panama.  I tried antibiotic ointment for a month before finally seeking medical care.  I was told to come for my appointment between 3 and 6.  I got there around 4 and they finally saw me about 5:55.  Luckily the waiting room was air conditioned.  The doctor did not take a medical history ( I have had skin cancer), just asked a few questions about the rash and gave me a few local steroid injections.  He also gave me a prescription for an anti-itch medicine to take at night and skin cream, and an ointment.  The appointment was only $25, but the prescriptions were $75, even with my 20% senior discount.

There are two movie theaters in town.  Movies are usually subtitled or dubbed.  I walked to the multiplex and saw Batman with subtitles.  One of the other volunteers in Santiago said she went to see it in the dubbed version and she was the only one laughing, because the jokes just don't translate.  The senior price for a movie here is $1.85 versus $3.25 regular price.  It is air conditioned, which is a good reason to go.  There is no air conditioning in the house except for the master bedroom,  but the classrooms at the university have it.  The temperature may be only 85, but the humidity makes it really uncomfortable.  They tell me that January and February are a lot hotter, but thankfully I will be gone by then.

Posted by footloosemary at 12:32 PM