Living at a zoo is a unique experience.  The first day, we got a tour and met a lot of the staff members.  The zoo takes up to four volunteers at a time, and most are sent from their home zoos all over the world.  At present there are two other female volunteers from Sweden, plus Leah and me.
It rained a little the first day, so we went to help cut up vegetables for the animals then stayed mostly in the cab of the truck while we went out and delivered the food.  The second day we were much more active in the feeding.  We also cleaned out the rhino cage.  Leah changed the water by scooping it out of the trough then putting new water in by hose.  I raked the sand in the rhino cages, smoothing over the big holes in the sand they make with their bodies.  Henry, a regular staff member took care of the poop.  Rhinos only defecate in one part of the cage so it was in a nice pile already.

We sat on the top of the bags of food in the truck while we went to the various animal surroundings to deliver food.  The animals seem to know you are coming.  We watched them feed the water buffalo, since it is dangerous to get out of the truck with them around, but were able to empty the bags on the ground for the zebras, rhinos, gazelles, etc.  The giraffes get their food in a high trough but will also eat out of your hand.  We put the food in the lion cages and then let up the cage door by pulling on a rope so they can get into the cage for the night and eat.  We could not get up close and personal with the chimpanzees, since we had not had rabies shots, but were able to watch them as they went into their "night" cage and ate.  They peel their bananas.  During the day they live on their own island in the zoo. 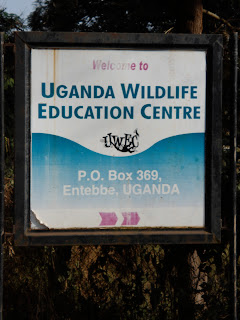 There is an 8 month old baby elephant that was abandoned by its parents when they were running away from poachers.  A fisherman found the elephant and brought it in his boat to the zoo.  It is still in isolation but we were able to put on masks and sterilize our shoes so that we could get closer to it.
There is a cat hanging around the lakeside restaurant that looks almost like Poa, the cat Breanna adopted in Tanzania.  I am not a cat lover but kind of miss him.


They do camel rides but the camels are often walking around free.  Also there are warthogs and monkeys wandering around.

The last night, there must have been a party at one of the hotels on the lake.  Usually I wake up in the night and hear lions and chimpanzees, but this night the music went on till 5 a.m.  Not the way I want to remember the place.
On 2/18 I flew from Uganda to Capetown.  I don't print out my reservations anymore, but they did not even ask for the reservation number, just took my passport to check me in. At immigration in Johannesburg, almost all the people in the South Africa line were white, but in the "others" line it was about 50% black.   I had a pretty uneventful flight, then Tim picked me up at the airport in Capetown to take me to my new volunteer assignment.
Posted by footloosemary at 1:39 PM