Tim, the head of the IVHQ volunteer program in South Africa, picked me up at the airport in Capetown and drove me to my new home, a condo overlooking Sunrise Beach.  It was a breezy afternoon, and there were about 15 kite surfers on the beach directly in front of me.  It is about one mile to the town of Muizenberg, which is at the top end of the Marine National Park.  It is in a bay surrounded by mountains and includes Surfer's Corner, where hundreds of surfers seem to congregate every weekend.  There are numerous surf shops and eating places, so it reminds me a lot of where I grew up in Santa Monica, California. 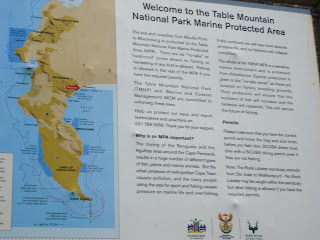 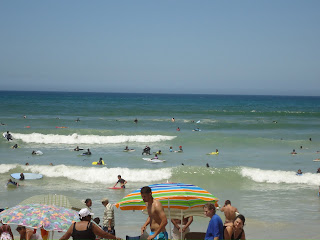 There are 10 women in my condo and one bathroom.  I have been getting up earlier than most so I can shower in the morning.  Most of them get up after 7.  There are four girls in the upstairs loft who I call "the girls," because they love to party and go out almost every night.  They are from New York, Australia, and two cousins from Canada, all aged 19 to 22.  My roommates are Claudia from Switzerland and May from Egypt.  In the other bedroom are Kate from Connecticut and Brooke and Molly from Colorado, all under age 25.


The first day they took us for orientation in Capetown.  There is a train station in Muizenberg and it is about 45 minutes away, with about 25 stops.  We went to the Vodacom shop and I got a local SIM card for my phone and modem, then walked through the main part of town, including the Company Gardens, where the old Dutch East India Company grew their food, the Parliament Buildings, the Market Square, and Long Street, which is full of Backpackers hostels, restaurants, and shops.  It definitely feels like a first world city here, unlike the other big cities I visited in East Africa.  They still drive on the left side of road, though.


There are three main programs here: a nursery school and primary school in the township, and the surf program to reward good students by teaching them to surf.  I am based at the primary school, where some of us act as teaching assistants and some do a sports program.  It is about a three mile walk from the condo.  I have been helping out in 5th grade since their teacher is absent this week.  I don't think they have any substitute teachers so they usually just spread the students around and the other teachers babysit them.  Since we have a lot of volunteers, three of us are taking on the fifth grade.  Truthfully, they are little monsters and we could not control them.  One or two would get up and start to sing or dance, then as soon as you made them sit down, another group would start singing a marching song or something.  Some students didn't even pretend to be listening and sat at their desks and drew pictures of gang symbols.  When the principal came in periodically, of course they sat at their desks quietly.  It really makes me wonder why I wanted to be a teacher.  My students in Tanzania were so polite and listened to me.  Very frustrating.  Don't know if I will make it 5 weeks here.

Posted by footloosemary at 9:46 AM