In the morning we left at 7 a.m. to catch the ferry across the river.  Almost immediately after we crossed, I saw a large tree with about 30 large birds scattered among its branches, which I was told were Marabou storks.  On the side of the road I also saw an Abyssinian Ground Hornbill, a rather large bird so called because he prefers staying on the ground to flying.  There were many crested eagles, which are black with white wing tips.


The morning drive was all dirt road, but after a couple of hours we took a 12 km detour on a much rougher single lane dirt road to the top of Murchison Falls.  I did not expect much, since the falls did not look like much from the boat at a distance the day before.  The top was totally incredible though.  Imagine a wide river of class 5 rapids forced through a 23 foot channel: really high water pressure, lots of spray, and two rainbows!  My guide and I were the only people there, which made it even better. 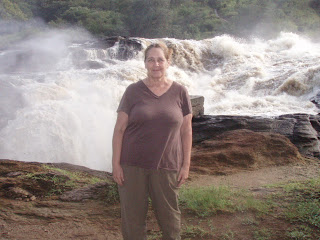 In the afternoon we drove a few more hours and stopped at the Ziwa Rhino Sanctuary.  There used to be hundreds of rhinos in Uganda but poachers took advantage of the civil unrest in the 1970's and 1980's, so that by 1983 there were none left.  Asians evidently value the horns as aphrodisiacs so there was a good market.  In 2001 Kenya donated a pair of white rhinos to the Entebbe Zoo.  A ranch donated a 30 year lease on land for the sanctuary and the US Wildlife Federation gave a grant.  Kenya donated four more rhinos in 2005 and Disney Animal Kingdom in Florida donated a pair in 2006.  After a sixteen month gestation, the American female and one of the Kenyan males had a baby in 2009, named appropriately Obama, the first rhino born in Uganda in 30 years.  The same pair recently had another baby named Malia, after President Obama's daughter.  The total rhino population is now 10.  When they get to 30 they plan to start introducing them back into the wild. They eat only grass and can weigh up to two tons, proving you can gain weight on a vegetarian diet.

Our small group of six people drove a ways into the park before tracking the rhinos through the bush.  Our instructions are to always stay behind the guide, walk in single file, and if the rhino gets annoyed or charges, move near a tree and be ready to climb or stand behind a large tree.  I was able to see Obama and the mother and calf he had hooked up with since his own mother pushed him out so she could take care of Malia.

After lunch we pushed on to Kampala and I checked into the Ruch hotel.  Most of Kampala that I have seen (sitting through a few traffic jams) is pretty poor, but the hotel is near the Parliament, embassies, and National Theater, a more prosperous looking area with sidewalks and lots of trees and flowers.
Posted by footloosemary at 1:56 PM