I enjoyed a buffet breakfast at Chobe again overlooking the Nile River with hippos and water buffalo.  We left at 7 a.m. for our 5 hour game drive through Murchison National Park.  We went through several different ecosystems along the way,  from thick acacia forest, to savannah with predominantly fig trees, then drier savannah with Borassa palm trees, then to rainforest by the Albert Nile.  I saw lots of Jackson's hartebeests, Uganda koes,  water buffalos, baboons, warthogs, and giraffes.  There were lesser amounts of bushbucks, vervet monkeys, and elephants.    I only saw a couple of oribis, a small antelope that was licking up salt from the road.  And I only saw one lion, a female who was hiding in the shade of a bush flicking her ears and moving her head around.


After the drive we checked into the Paraa Safari Lodge and had lunch.  The decor here is "early African explorer,"  with the closets made to look like old steamer trunks and decorative touches like old typewriters and navigational tools.  The public rooms are named after explorers like Speke, Livingstone, etc.  I have a big balcony in my room with huge rattan chairs that overlook jungle, pool, and river, although there is too much vegetation between the hotel and the river to be able to see any wildlife.


The movie "African Queen" with Humphrey Bogart and Katherine Hepburn was filmed in this area.  In 1954, Ernest Hemingway and his wife were sightseeing in a small plane and crashed in the river just below Murchison Falls, then camped on the shore with the crocodiles while the world reported them dead.  The plane that rescued them exploded and crashed, so that then they were really hurt.

In the afternoon I took a 3 hour boat trip to the falls and back.  The boat was a two level pontoon named "African Queen," of course.  There were about 15 fellow travellers, including Ugandans, a Norwegian, Englishman, Swiss, and a group of American black musicians. It is all preserve along the way, so we saw a lot of wildlife, including tons of hippos, waterbucks, water buffalo, and lots of crocodiles.  I only saw one elephant out in the open, who was taking a bath.  You mostly see only the protuberant eyes and wiggly little ears of the  hippos but we were able to see many out of the water.  The guide says they sunburn easily and the skin does not heal so they stay in the water most of the day.  There were so many types of birds I don't remember them all, but there were a lot of African fish eagles, white herons, egrets, and kingfishers.  We could not go right up to the falls because of the current. 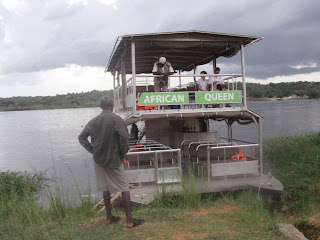 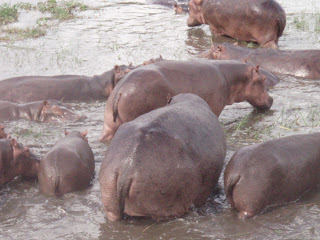 Dinner was another luscious buffet.  I am trying to push the protein while I can get it, but find I miss the vegetables if I do not eat them, even though I have never eaten so many vegetables in my life as here in Africa.
Posted by footloosemary at 1:53 PM