That morning around 5:30 a.m. I was startled awake by a loud noise. It turned into several people chanting loudly as they wove their way around the aisles and floors of the huge hostel. This was the wake up call by the hospitaleros. The couple in the bunks opposite mine were up and gone within ten minutes, even though it was still pitch black outside. I stayed in bed awhile longer.

A big mistake was pre-purchasing breakfast the day before, although if I hadn't I wouldn't have got a ticket. I was scheduled for breakfast at the opening time of 7 a.m. I took my time washing up and re packing my pack. Another hiker walked by around 6:30 and I joked, "Getting an early start?" since sunrise here isn't till around 8. "No, I'm going to breakfast." That should have given me my first clue that you don't just go, sit down and get served.

I headed out the door around 6:45, thinking I had plenty of time to come back after breakfast to brush my teeth and go to the bathroom before they closed at 8. Two hospitaleros stopped me at the door as I was on my way to the restaurant where breakfast was being served. "Take your pack," they said,"because we lock the door at 8 and you can't get back in." My second clue. I dutifully went upstairs to get my pack then walked over to the restaurant and saw a long line of people waiting to get in. A few inquiries told me they all had tickets for 7a.m. Should I stay or should I go? I had already paid my 3 Euros for breakfast, so being cheap and not knowing what was ahead, I opted to stay in line. 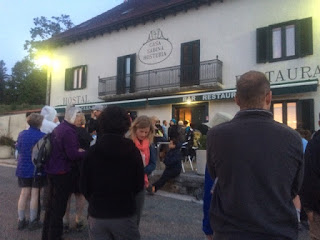 About 45 minutes later, I finally claimed my toast, jam and coffee. I had to clear the dishes off a table so I could sit down. I was joined by two other peregrinas and we had a pleasant chat over breakfast

I headed out with the two girls to make sure I was going in the right direction for my first steps on the Camino. A sign showed I had 790 km (over 490 miles) to go. The girls sped off at a quick pace after a "Buen Camino!" The Trail was wide and many others walked past me.
They say you find others who walk the same pace as you, but so far they hadn't materialized.

After about twenty minutes I saw a few restaurants with pleasant outdoor tables.
That would have been a better place for breakfast, but I'm not sure how early they opened. I'm told that 9 a.m. Is the typical time. Rather late for me. 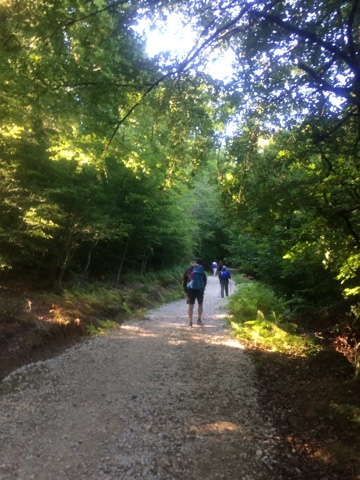 After a pleasant walk through woods and  hilly farmland, I stopped around midday at Espinal, a village of a few blocks with green hills all around. I had a lunch of salad, bread and coke light then walked around the village a bit. I'm staying in a 16 bed dormitory at the Hostal Haizea. That sounds like a lot but nobody checked in till several hours later, so I could do my laundry and enjoy reading on the sunny deck.

That night we all gathered for a pilgrims' meal in the downstairs restaurant: grilled ribs, spaghetti, meatballs, fries, bread, wine. It was pleasant getting to know the other pilgrims from the UK, Australia, Zambia, Italy, Serbia, and Russia.

Only four miles by the Camino guide, but you do a lot of walking besides that. My Fitbit says six miles today and my poor foot says "enough!"