Finally I have four days off in a row and can go somewhere!  I decided to go to Bocas del Toro, a resort area on the Caribbean side of Panama.  It was formerly the headquarters of Chiquita Banana Company.  The region has many tropical islands and hosted the Survivor show at least once.  The WorldTeach volunteers in Santiago are going there the next week, but they have one or two weeks off since they teach in elementary schools, which have a regular spring vacation.  I will have to go alone (which seems to shock my host family) since this is my only longish stretch of time off.

I took the bus to the other side of Panama, which took about five hours and cost $8.50.  Then I took a 40 minute water taxi to Bocas Town, which cost $2 (senior rate).

I stayed in the Hotel Palma Royale, which was a splurge at $80 for a room with air conditioning, a small patio, and breakfast.  I later looked at some of the hostels in town.  They cost $10-20 but some look pretty noisy and potentially unsafe.  I booked a boat tour to a nearby island which had snorkeling and lunch for the next day but it ended up raining.  I skipped the boat tour and took a bus to Drago Bay on the other side of the island.  We went through a lot of jungly areas for about an hour and ended up at a kind of low rise hotel complex with an outdoor restaurant, a small beach, and an ecology institute.  I had red snapper for lunch and browsed through the souveneir stands before taking the bus back to Bocas. 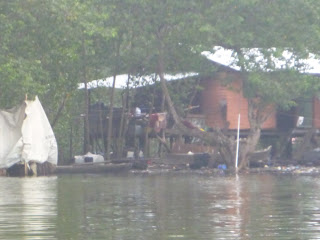 It rained pretty much the rest of my time there,which is typical for Bocas.  At least I felt like I had a little vacation.

Posted by footloosemary at 4:37 PM