I have taught school for a week now.  I have four streams of Form 1 English.  Originally that was 28 hours a week, but I told the Academic Master that my contract limited me to 26 hours.  He also knew I was walking to school in the dark so he decreased my schedule to two hours a day, teaching each stream once a week starting at 9:45.  My other classes were given to Melchior, the head of the Language Department, which makes me feel terrible, since he already had a lot of classes.  On Monday he told me he was going to Arusha for the week to attend his wife's University graduation.  I asked him what would happen to the students and he told me they would sit in their classrooms and study.  So I ended up volunteering to take my classes back for the week.  Maybe next week I will have more free time to get organized and study Swahili. 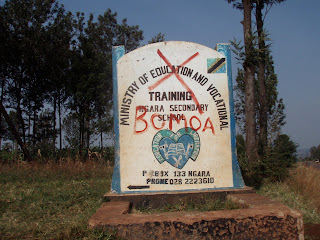 It is a little frustrating trying to get students to talk in the classroom.  Some obviously know the answers to questions, but others seem unable to write or speak, probably a reflection of lack of English training in primary school.  I get a lot more response when I have them answer as a group.  Form 1 is usually 13 to 15 year olds, but my students range in age from 10 to 19.  They have to pass an exam to get to secondary school.  It also costs money to attend, plus uniforms, books, etc.  Only primary education is free here.  It is taught in Swahili, while secondary school is in English.  So if you don't understand English, there is no way you will pass the secondary school exams.
Things are a little better on the home front.  Still no shower, hot water, or cooking, but we met a neighbor, Rob, who has a stove, refrigerator, hot water, shower, TV, and other amenities.  He works for Concern International, an Irish NGO that deals with clean water for small communities, and they drove him to Mwanza several times to get things, including a bicycle.  Rob has two bedrooms and two bathrooms, so he gave us a key so we can use his second bath and shower.  He also has a 4 gallon teapot so we can boil hot water and bring it back in our thermos.  The water is not filtered, so still tastes kind of like dirt, but at least we can drink it.


We made spaghetti one night at Rob's and have eaten dinner a few nights at the canteen at Afriline.  They always seem to serve the same thing: rice, beans, spinach, and meat.  Most of the meat is not very edible, either stringy and tough or all fat and bone, but the sauce tastes good on the rice.  Breakfast is usually a peanut butter and banana sandwich.  They serve tea at school around 11 a.m. and I usually have a mendazi, or small doughnut, with my tea, which serves as lunch.
I arranged a PikyPiky, or motorcycle, for transport to school this week since I had early classes, but I am back to walking next week.  The one hour walk to school is actually nice because there is more downhill, but coming back in the afternoon can be hot and tiresome, because it is uphill.  I try to break it up by stopping at the supermarket (a larger than usual duka, not what the name implies) or other shop.  Funds are kind of limited without being able to recharge at the ATM.  We plan to go to Mwanza next weekend.
Between walking and not eating much, I should lose some weight here.
Posted by footloosemary at 7:10 PM